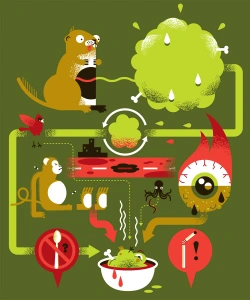 Dirty Birdy Tweets was the phrase that caught my attention back in the early 60's when I first heard the school yard ditty containing it.  It wasn't the greasy green gopher guts and mutilated monkey feet, or the french fried eye balls swimming in a pool of blood.  Nope, it was the less graphic line about those tweets that intrigued me most.  While I didn't exactly know what "dirty birdy tweets" were, they sounded bad.  Something less lovely than the songs the birds that frequented our feeder would sing and sometimes sing back in response to my call or whistle.  Possibly more in line with what they said to each other in their attempts to dominate, defend turf, and secure a mate. It was a startling moment in my later years when I realized what those spring songs I looked forward to hearing at the end of the winter would mostly likely translate to in English.

As it turns out, I may have also misheard/misinterpreted the bird line, with dirty birdy feet and turdy birdy feet presented online as part of the original lyrics.  Apparently no one else was singing or talking about dirty birdy tweets back then.

While this falls into the category of juvenile holdovers on one level, dirty birdy tweets today covers a whole 'nother level of juvenile doings, power hold overs and cover up.

Today, David Strom, published a post on HotAir entitled, Pedophiles finally being kicked off of Twitter.  He starts with this:

"The Establishment™ has been expending enormous effort to discredit Elon Musk and work cleaning up Twitter and removing the bias.

Many have even declared their resolve to leave Twitter because they cannot coexist with the evil Right Wingers who have been let back on the platform. What they won’t tell you is that they were perfectly fine sharing the platform not only with evildoers like the Taliban and the Iranian government, but also with a flourishing trade in child pornography…pedophiles exchanging pedophilic images was just fine, but a former president being allowed to speak was horrifying.

Under Elon Musk that has all changed. For the first time in Twitter’s history the company is actually on a crusade to eliminate the trade and kick the child molesters off the platform…Nearly 87,000 reports of child sexual exploitation on Twitter in just one year. And the company did little to deal with the problem. Until Musk.

Strom says, "I have written about this before, and it was an open secret that Twitter was a major platform used by pedophiles to exchange illegal content. None of this bothered all those Leftists and MSM folks decrying Musk’s rebalancing the ideological mix on the platform. They gleefully tweeted away without compunction, and never pressured the company to deal with the issue…

The exchange of pedophilic material was known. Was reported by journalists who actually cared about the issue. Yet the vast majority of MSM reporters remained silent, because Twitter was just too good an ally in promoting their preferred Narrative™."

Dirty birds all around.  The whole thing is worth a read.  With Musk, (whom a highly regarded previous commenter at Levity refers to as the “Musket”) responsible for letting off several rounds of birdshot.

Musk said Saturday. “It is true — yes — Twitter has done more to stop child exploitation in the last month than probably the last ten years..."It kind of blows my mind, frankly, and we’re gonna keep doing it — It’s always gonna be number one. I mean, it’s like kids can’t defend themselves —so, we must.”