The steady drip, drip, drip, of bad news and anti-Trump media sentiment (which is not news) is just torture:

I promised deborah a shot of my (white) calla lilies, which are in bloom: 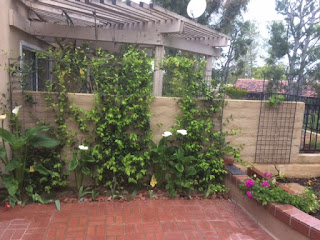 There are three levels of flar goin' on. There is a bottom row of tulips which came and went in February. What's left of them can be seen better here: 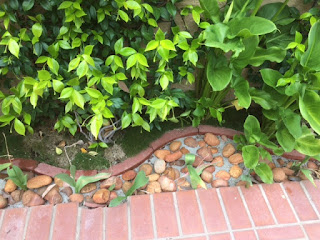 Tulips are interspersed between rocks and sand. Lilies and star jasmine are rooted in the higher soil, covered with Korean grass. The star jasmine, the climber on the racks, is not yet in bloom; this should happen out here in May or whenever the weather holds steady above 70.

Added: A "before" shot taken that first year when I was still working on the inside: 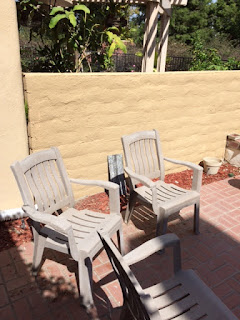 I have given up on national news sources -- completely. This includes sources like Drudge, NYT, WaPo, etc. To stay informed, I just subscribed to a local news source -- in my case, The Orange County Register. $12.50/mo which includes a Sunday paper copy.

I've decided that real news is local and national news is yokel.

In the immortal words of Talullah Bankhead, "The calla lilies are in bloom".

On the Winnie The Flu front, Don't sweat the bad news and anti-Trump media sentiment. The models are showing themselves to be wrong.

And people, much like yourself, are going stir crazy.

Give it a week.

Agree. The Trump Hate Squaddies are so obvious, their shit-stirring, self-serving, political motives are comically clear, and now a lot more people have time and motivation to notice. Even here in super-blue SF Bay Area, people are getting pissed. This week is being billed as the apocalyse week. Betting that it won't be. People are going to start to resent Nurse Ratched. To quote McMurphy, "In one week, I can put a bug so far up her ass, she don't know whether to shit or wind her wristwatch."

Thanks for the pics, chick. Beautiful. A few years ago I was visiting a neighbor who had some plants blooming. Can't remember what they were. May have been Callas. She said she took up the bulbs every fall to replant in the spring. Now, I knew about taking up tender bulbs, but that was the first time I realized that when you take up bulbs the plant gets bigger every year.

Thanks, Deborah. I just added a "before" photo showing my starting point.

The British play, The Lake, debuted on Broadway on December 26, 1933 and was one of acting legend Katharine Hepburn's first major Broadway roles. Directed by Jed Harris, the infamous "big bad wolf" of American theater, the play was a critical and popular flop, though it had a respectable run of 55 nights. Hepburn in particular drew sharp rebukes in the newspapers, many of which were penned by the same critics who loved her in The Warrior's Husband. Columnist Dorothy Parker famously remarked that Hepburn "ran the gamut of emotions — from A to B." Despite the poor response, Harris decided to take the show to Chicago, saying to Hepburn, "My dear, the only interest I have in you is the money I can make out of you." Hepburn refused, and paid Harris everything she had, $13,675, to close the production instead. Hepburn later referred to Harris as "hands-down the most diabolical person I have ever met",] and claimed this experience was important in teaching her to take responsibility for her career.

In 1937, Hepburn included a line from The Lake in the film Stage Door, thus making fun of her biggest failure. The line became one of Hepburn's signature catchphrases: "The calla lilies are in bloom again, such a strange flower, suitable to any occasion..."

Who are you seeing in role of Nurse Ratched, Amartel?

Here in MI, we have the Dem Governor, Gretchen Whitmer, behaving in that manner, with many angered by the blaming and flip-flopping she's been doing.

One of the headlines tonight is: Michigan Third in the Nation for Coronavirus, last for data about patients.

"Thirty-three states release daily numbers about hospitalizations for the coronavirus. Eighteen release data on patients who have recovered.

None of the information is available in Michigan, which has the third most deaths from the virus in the nation."

I was surprised how big those Chernobyl lilies got this year. Indeed they were dug up and moved.

Where do you get the energy? Mrs. Chick is lucky to have a handyman about. I remember the firepit at your old place.

Where do you get the energy?

My back now demands that I move around and keep active. Pain is an incredible motivator!

The heavy rains we're having may help bring up more deeply buried tulips. I planted more than came up, but I wasn't careful about depths on purpose.

That wall is only one facet of my yard handiwork. How would you like a slow drip, drip, drip, of the entire garden space?

Mama, I thought it was Tallulah, but, if you have verification, I must concede.

Heard it a lot as a kid when impressionists used it like Jimmy Cagney's, "You dirty rat".

Which he never said, either.

This place is an education.

That would be great. And I will tell tales of bulb neglect. I have a sad history of ordering bulbs but not planting till spring. In Virginia I once planted tulips in spring that bloomed with the azaleas. It was pretty. All these years later they are still there.

This year I hastily dug a long trench next to the wall of my mom's garage. I wanted them to be the same depth, but they weren't quite. Interested to see how varied they will be in bloom time/height. I did this about three weeks ago, and haven't seen a peep of them. I'm sure they'll come up, but am surprised they haven't made an appearance yet.

I'll try to post pics of them, and some at my house that I planted last year that are coming up.