This is a funny episode.

The stupid thing about the sweater is the lines of coke are drawn in the wrong direction. A coke snorter will go left to right or reversed, not close to himself then farther away from himself. Duh. 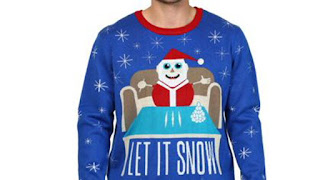 But I didn't believe it.

One of my jobs there was to count piles of currency to be destroyed. People didn't like this because it really did interfere with our regular job, but I liked it because it was something different. And it was bizarre.

Another of my jobs was to destroy it.

Teams of four people pulled from different departments were assembled each day to do those two things.

It brought us together.

Two teams of two people to count the same piles of cash.

A table full of cash in equal bundles. Then bundles of bundles. Extremely large bundles of cash. Destroyed every day.

Then two teams of two people to destroy it.

When tours of people saw this they were always aghast. Always. They always had the same simplest questions. "Why don't you give this money to poor people instead?" Their questions revealed a comprehension of near zero. And there was no convincing them otherwise. There is no talking sense to them.

There is a giant chopping machine in the subbasement for this. It reduces the bundles of cash to shreds that is more shredded than confetti. Tiny dots of filthy paper. The dirtiest hands handle this paper until it nearly falls apart. Diseased people. Filthy people. Truly filthy cash. It's hazardous just touching it. Breathing the dust. It's enough to put you off cash altogether. Almost. But not quite.

We packaged it in tiny bags and handed them out to kids taking tours. They loved it.

I have a very large puffy bag of it that I combine with plaster for Egyptian style frescos. They used hay, I use shredded cash.

Sundays the Washington politicians come out of the woodwork and go on cable television for interviews.

Sundance likes to gather the most relevant interviews, and it's been an interesting week.

On Fox there is one reliably good interviewer, Maria Bartiromo who works hard to get the facts right.

An aside before the serious stuff.

Tonight I realized that Bartiromo is a very good subject to lipread. I noticed this with her "L" mouth shape. The triangular tip of her tongue is visible inside her mouth when she pronounces each "L" so clearly that it's as if a cartoonist drew it. Her "th" sounds are also exceedingly clear.

English has forty-four phonemes. But the number of visibly distinctive visemes is much smaller. Only about 30%. That means there is a great deal of multiple overlap of phonemes onto visemes. That's why the bad lipreading videos are so funny. It's very easy to get everything wrong. A very good deal of intuition goes into it.

When you concentrate on Maria Bartiromo's lips, then her whole face takes the appearance of a puppet. A very good animated puppet. Because those "Ls" and "THs" are so incredibly clear.

Now I ask you, who's going to tell you this? Where else are you going to hear this?

Maria Bartiromo interviews John Ratcliffe. Ratcliffe is the only remaining Republican senator who has seen all of the classified evidence behind the FISA applications and the intelligence abuses in 2016. The other two Republican senators who saw it are now gone; Gowdy and Goodlate.

The SSCI is compromised by how they worked with SSCI Security Director James Wolf to leak the Carter Page FISA application to the media and by how Vice-Chairman Warner communicated covertly with Christopher Steel and back-channeled information to Robert Mueller, plus several other unsavory things that happened.

SSCI can block anyone who would be a risk to them and that's why they will never allow Ratcliffe to be Director of National Intelligence.

Maria Bartiromo with John Ratcliffe, if you care to see it.

Maria Bartiromo with Devin Nunes. Devin Nunes is former Chairman of the House Permanent Select Committee on Intelligence. Nunes increases his warning and drops all pretense and states openly that FBI officials and FISA judges work together with the intent to conspire against the American people.

Maria Bartiromo with former AG Michael Mukasey who describes FBI conspiracy and explains why Lisa Page is suing DOJ and why FBI refuses to un-redact her text messages and why the current FBI Director Chris Wray is covering for Lisa Page and Peter Strzok.

Weird. I watched that twice, from this upload then it changed. And now it's not even in my watch history.

I went back and found this for the 12th but uploaded the 115th, and it's the same episode and found by searching "today."

I don't understand why Gutfeld has all those 2 second videos. It doesn't make sense. YouTube must be shrinking them after the fact.

This is also available in part 2 and part 3 but not part 1. Weird.

Thanks for showing this, I listened to it on XM before. It's more enjoyable in video.