Last night I made bread, and boy, that was a massive effort.

It wasn't that hard but I had to do it with my ribs hurting, my neck hurting, my head throbbing and my eyeballs being squeezed by a malevolent spirit and my throat hurting.

Today I tried to speak and words come out like a croaking frog.

Then I realized that I didn't even knead the dough.

It rose in the bowl and looked perfect. I drizzled a ring of flour around the edges. Then I used a plastic bench scraper that can be pressed to take the shape of the bowl and shoved it downward dragging along with it the sprinkled flour so it doesn't re-stick to the bowl. The whole mass is loosened and upturned onto the work surface.

The blob is stretched in all directions. And that is all the kneading that I did.

This redistributes the yeast.

They're having sex inside the blob and suddenly I make them all switch partners.

That's how we roll.

The stretched dough is folded into a loaf and pinched shut.

The elongation is trimmed to fit in my pan.

The extra is turned into rolls.

So, when baked, it collapsed a little bit and I don't like that.

This is using a covered pan for a Pullman style loaf.

I had King Soopers deliver groceries. The young man was a lifesaver. He did very well picking things out. I have nice deli ham and okay sliced cheese and now all I need is some bread.

When young people help you out so greatly I believe in rewarding them handsomely. Had people done that with me then I would have been a lot more cooperative. So little from us means so much to them. And when I think about it, he saved me a huge amount of trouble.

Bless your heart, Young Man, you saved me a huge amount of trouble.

But he did make some stupid mistakes. Next time I'll take his suggestion and use the app to keep in contact while he's going around filling the cart. There is no way that young people have to predict our preferences or why. They don't know why four or five large russet potatoes is better than the small bag of Yukon Gold potatoes. They do not know a pound of serrano peppers is too many.

I have a few cups left of whole wheat that I bought from CoBrew downstairs. They chop up the grain to chunks to make a sort of grain tea to start their beer.

I buy their grain and mill it myself to fine powder.

The grain is malted. I bought the most heavily malted. When the grain hits the water (last night was simmered milk) the odor that comes up is amazing.

But that malting process involves toasting the grain to stop the action. So each grain is already cooked. It will not behave as regular raw grain.

To compensate for this shortcoming, for the rest of the flour I use high protein bread flour. Now I have increased gluten activity combined with inert cooked whole wheat.

When the loaf baked, the aroma that filled the entire apartment and the hallway outside was provocatively alluring. I'm surprised people didn't beat down my door to get at it. 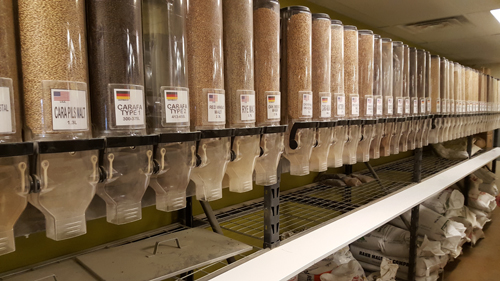 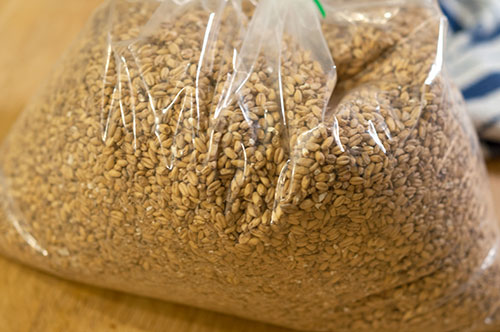 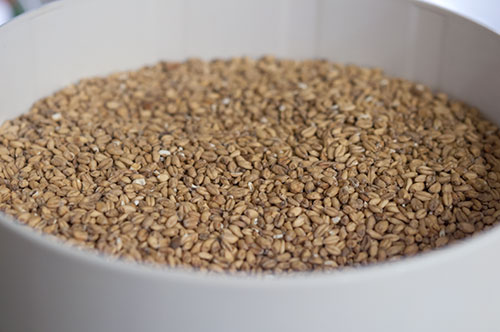 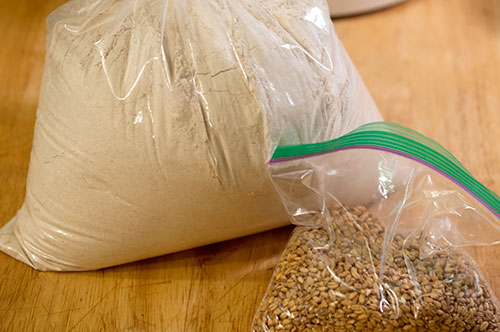 It's incredibly expensive but I don't care.

Much more expensive than the flour that you buy from the grocery.

But this willingness to experiment is the reason my bread is so g.d. alluring. I've baked extra loaves and taken them downstairs to show them, "See? This is what your grain does." And they're all, "Holy crap, this is good."

Now it's almost gone and time to replenish.

In some ways it's actually better than sourdough.

The bread this produced is light as a feather. The opposite of ordinary whole wheat.
Posted by Chip Ahoy at 2:18 PM