When I watched a video of Trump departing for Camp David with several advisors I wondered why Trump would even want to go there when he has his own digs that are better and that he strongly prefers. I visualized it. It didn't make sense. Oh well.

Now we know he had a meeting planned with Taliban and Afghanistan president.

But that didn't work out.

[The first tweet is a link, the second two are screen shots.]

Unbeknownst to almost everyone, the major Taliban leaders and, separately, the President of Afghanistan, were going to secretly meet with me at Camp David on Sunday. They were coming to the United States tonight. Unfortunately, in order to build false leverage, they admitted to..
— Donald J. Trump (@realDonaldTrump) September 7, 2019 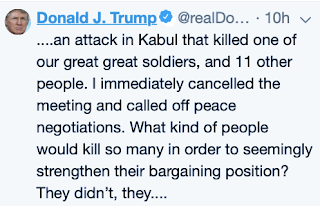 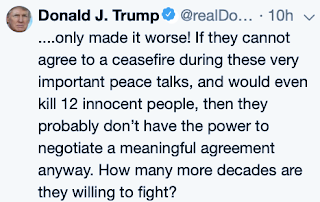 There you have it.

The Taliban miscalculated with Trump. Whatever they were trying to do didn't work. And I doubt Trump will cancel a planned meeting in progress and let it all pass. Expect more headlines, "Americans shoot up Afghan weddings."
Posted by Chip Ahoy at 4:56 AM

They forgot, if they ever learned, Sun Tzu.