There are many videos available on YouTube about how to make bao. I chose this one because I cracked up laughing when she places her newly formed bao into the steamer and her voice changes to baby-talk as if the bao is a live baby. And could not stop laughing the second time. And had to shut it off and just laugh on the third time.

One time in a restaurant in Tokyo I was served steamed buns with a meat filling. I had no idea what the name is but I dreamt of those buns ever since. I've never seen anything like them on any Japanese menu and I kept looking for decades. Literally hundreds of Japanese restaurants.

So I decided to try my hand and make what I recalled from way back then at eleven years of age. There was only one and it was big. The meat inside was like meatloaf, and the coating was bread that was steamed. 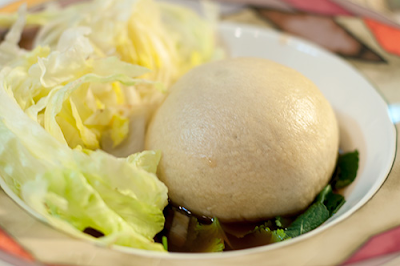 Whatever you do, it turns out great.

At a Chinese restaurant here in Denver they serve roasted bbq duck with steamed buns. They're merely a disc of dough folded in half and steamed instead of baked. You open them up to create little sandwiches with the messy bbq duck. Very easy to do. And fast. It's just a different way of thinking about bread. You'd think it would dissolve when it's steamed, but it doesn't.

Check out the variety of things, if you like. [steamed buns]
Posted by Chip Ahoy at 4:22 AM