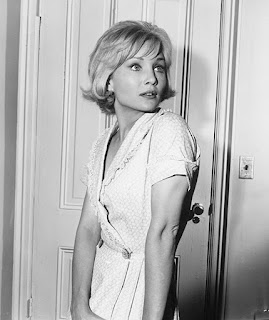 She was one of the busiest girls in the 1960's and 1970's starring in Bonanza, Dr. Kildare, The Virginian, The Big Valley, The FBI, Love American Style....just about every show I watched back in the day.

I paticularly enjoyed her stint in Bonanza where her boyfriend in the show later went on to book'm Danno.

Hey did you notice that Ace of Spades has started to have the same meme where he post photos of hot babes and dares you to figure out who it is. I thought only Evil Blogger Lady and I did that!
Posted by Trooper York at 8:16 PM

Labels: Bonanza, Hossaroni, whose that girl

I'd have no idea, but she is hot. Funny how even as an old fart you still see that shit, long after it makes no difference.

Well, unless you got a lot of money. Forgot that part.

Another lost little girl with a look to match that plays to hotness when paired with an adult body.

...she was the daughter of well-to-do political reporter and journalist for the New York World, and his astrology practitioner wife, both of whom divorced while Susan was still quite young (age 3). As a privileged adolescent, she went to various public and boarding schools. As a teenager, she lived with her father and traveled with him overseas.

Lots of surviver grit behind the sparkle:

she experienced an event in February 1959 that belied her later aviation accomplishments. She was a passenger aboard the Clipper Washington, a Boeing 707 on a transatlantic flight from Paris to New York City when it dropped from 35,000 feet to 6000 feet. It happened on February 3, 1959, the same day Buddy Holly died in an airplane crash. These events caused her a paralyzing fear of flying and it took extensive hypnosis to overcome it. In July 1964, she was reintroduced to personal flying during an evening flight over Los Angeles in a Cessna 172. The experience motivated her to return the next day to the Santa Monica Airport to begin training for a Private Pilot certificate next year.

In 1966, she survived the crash of a Piper Cub near Santa Paula, California that a friend was piloting She was named Pilot of the Year in 1970.

Attempted to become the first woman to fly a single-engine plane solo from New York to Moscow, but was deterred in Denmark when the Soviet government denied her permission to enter their air space. Her memoir "Odyssey" detailed her journeys as a pilot

So I was right.

Mama jogged my memory that she was a pilot. The only other part besides the original Star Trek pilot where she showed some sex appeal, not to mention lust, was her turn on the Man From UNCLE, where she set her cap for Illya.