Story at the Gateway Pundit, with disparaging tweets, bullet points of unrelated material, and comments that go off the track. 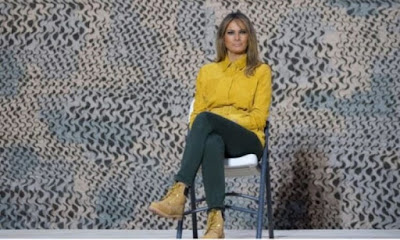 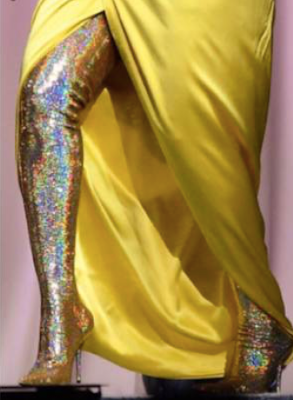 They were both dressed appropriately. Melania was in a large tent in the desert and Michelle was out pimping her book.

Honestly, the woman has the fashion sense of a 12 year-old girl in Tokyo. And it's no fair, really. Melania was an actual fashion model. And here the leftist will be quick to say, "Yeah, and we have the nudes to prove it." And then I say back, "Still no fair. Michelle cannot  do nudes or she would. Everyone would see she has a penis." And then they would know however low that they go, I go lower. And then flustered they say something like, Trump is ruining the planet! And sticking to the subject I say, "And it's bigger than yours."

Oh man, that reminded me.

Very low-level language. Skip this if you're not in the mood for that.

I got the weirdest call at 11:30 last night, it came up "untraceable."

I thought it was going to be another computer generated sales call, that it was an actual human made it better.

It was a clear young male voice with basic vocabulary and American accent saying the rudest and threatening things that anyone has ever said to me. Intended to shock. I was expected to be annoyed and hang up.

It was actually fun.

This sounds like a teenager. So I asked, "Is it big?"

I heard muffled giggling in the background, sounding faintly like teenage boys covering their mouths with their hands stifling laughter, but it could have been the t.v.

More silenced giggling. But it could have been the t.v.

"Well, when you come over here and do that, can you at least take it easy at first? Gimme a chance to adapt? Or are you such an out of control animal that you just shove it in?"

More very faint giggling in the background. I'm not sure it's voices, it could be the t.v.

More giggling sounds in the background. It think it's muffled giggling, but it could be the t.v.

"You do realize that you're talking to a 64 year-old man. Are you still  sure you want to do this to me?"

The giggling is less muffled, more clearly teenage males listening in. I think. But I'm not sure. It could be a t.v.

"How dramatic! You stud. I rarely get offers powerful and plain spoken as yours. You are truly unique among sexual predators. Giving me a warning like this. Enflaming anticipation. And with a giant ****. You're awesome.

The suppressed giggles burst uncontrollably again. This is fun for all of us. What a little pervert talking so filthily to me, and then me acting like that's normal. Standard speech between dudes. The boys in the background are having a blast with this extemporaneous comedy filth telephone show. But there's only so far we can go with this. I doubt the boys called from my city. I think it's a group of boys, but it's possible that's not right.  It could be a t.v making those sounds.

"Listen, you big honking stud with your insuppressible big, long and thick ****,  you sound like a nice person. But I'm busy right now writing a post about Trump. Keep the number and call back. We'll make an arrangement for you to come over here and rape me really hard with your big fat long **** very roughly. I have to go now. Been nice talking to you. Bye. *click*

And the whole time I was thinking, "This is a LOT better than the computer generated sales calls I get everyday. A group of real humans having fun and with no sales in mind." Or perhaps it was just one human and a t.v.
Posted by Chip Ahoy at 6:56 AM

Politicization of everything. Why doesn't that turn off more of the country, turning leftists into a fringe group? I don't know.

But if I were a leftist I would have kvetched about Melania's habit of dressing in winter white, a clear signal to the racisss rabble.

Frederick's of Castro, the most outrageous trans fashion anywhere.

Timberland books were considered fashionable. Now they are not? These fuckers need a good horse whipping.

I wonder which company will experience greater future sales, Timberland boots or the whorewear paraded by Michelle?