Insty linked to the Federalist, The Man's Guide to Wrapping Christmas Presents. It's disjointed, unhelpful and wrong. The whole thing is just nonsense.

I like the Japanese approach to gift wrapping. It's similar to their idea about fences. Packaging is not so much to disguise a gift or contain it, as architectural fences are not so much to keep things in or out, rather, to block things from sight, provide a background for landscaping, or to direct the eye. You don't try to conceal a bottle of wine, or fake out the recipient by a watch packaged in a large box. Often the gift is in plain sight.

Once I accepted this it made wrapping a lot easier and more attractive. And useful besides. One Christmas I had three gatherings to attend in a row and among the various gifts were CD music recordings. There were four and I had in mind which ones to give to specific people. I cut a hole in the paper to expose a key portion of the CD printing, some photo on the front or the back to identify the music. When I got to the first party the recipient chose the CD intended for the fourth. It turns out I didn't get any of them right. All four chose a different CD than the one I intended for them. A serious old man chose Devo intended for a light hearted girl. Imagine that. And that taught me, I don't know anything.

Their philosophy differs somewhat. In the west we'll buy an expensive watch or jewelry with its own thoughtful felt-lined box, for the manufacturers know presentation is everything, then wrap that in cheap thin thoughtless paper. In Japan the wrapping is sometimes more costly and thoughtful than the gift.

You'll notice their approach is oblique. They'll make sure they have enough paper to cover a box and to wrap it straight on, then fold on the diagonal instead. I think this comes from wrapping in silk, and having the corners to tie for a handle.

I've given this book away to women five times. (And never wrapped it once.) They'd see it at my desk and thumb through it, tell me how interesting it is, then I'd say, "keep it." They couldn't believe getting the book was so easy as saying they liked it. Women love this book. 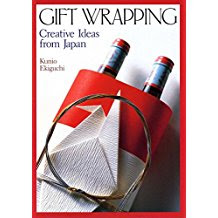 The stiff colored cord is called mizuhiki. It's a strip of starched paper rolled to a cord. You buy them in packages of 20 or so in different colors and metallics. Amazon, Mizuhiki.

Japanese wrapping in fabric is called furoshiki. There is a very broad selection of printed fabrics available in various sizes. Some are plain single color, others are gradients, and other are full-on prints. The fabrics themselves make excellent gifts. Amazon furoshiki. These are about $10.00 each for fabrics 19 inches square. 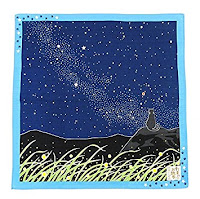 It's a cat looking at the Milky Way. 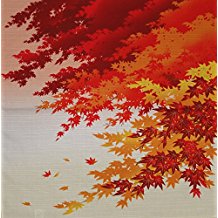 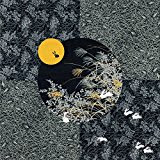 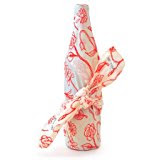 The larger ones made from silk and kimono material and design get rather expensive.

I should mention, the silk scarves that I sent to Alona were snatched by her two boys who ran around the house with them like wings. They spread them out on the floor and laid themselves on them. They wanted silk scarves for themselves. They just really liked the feel of the fabric on their skin and the way it floats in the air.

This video shows three ways to wrap a bottle or bottles, while the technique is also used to make backpacks and purses. There are a lot more videos for those.

I used the book mentioned above to wrap presents ever since I bought it. It completely changed my wrapping approach.

One year I went down into Gerkens Religious Supply on Santa Fe at 12th in Denver. Now very near to where I currently live. The place is trippy. An actual excursion. When you enter you see mostly clothing. From clerical vestments to dresses for girl's quinceañera. Most items are Catholic. Religious icons on the wall and weird things that I don't even know the purpose. Then the back room has all the items used in churches. It's completely packed with votives, prayer cards and crucifixion statues that go over an altar. I bought frankincense and myrrh and I bought incredibly long real beeswax tapers.

I wrapped two tapers together using ideas derived from the book. Very heavy handmade paper that I used for my art, to frame the plasters against black mat, with visible fibers and ragged fuzzy torn edges, instead of papyrus, which is clumsy by comparison. But just a broad band of that very heavy fiber white paper holding two candles together. Then another paper for thinner colored band. Like a belt. An obi. Then raffia tied as rough cord with scraggly ends, then some kind of dried plant that looks like miniature cattails purchased from Hobby Lobby.

The problem was, later, when I went to the homes of the people I gave the candles to, they liked the wrapping so much they never used the candles. They just kept the candles and wrapping as home decoration. My own parents did this. They never did use the candles. Years later they died and the candles were still there wrapped as they were given. Other homes still have their candles.

What a bummer. They're really cool candles too. I bought a whole box of the longest candles that Gerkens sells and gave them all away. All wrapped the same way.

And the frankincense is the best. It's the actual incense used in churches. I still have the leftover from that. It looks like little gold stones. And it smells like church. I packaged that inside red Christmas tree bulbs and included a package of charcoal incense burner starters. They're black charcoal discs that spark to get started packaged like large lifesavers. People burned that up all over town. Even in bars. (I gave one to a bartender) They were fascinated to learn what frankincense smells like after all those years of not knowing, Even my dad. He behaved like a boy with a new toy. One of life's mysteries solved.
Posted by Chip Ahoy at 12:19 AM

The wrapping thing is the old measure twice cut once. Make sure you have enough paper before you cut.

Folding the ends is the hard part, not too much.

I learned watching a pro.

The wrapping in fabric idea is phenomenal. Instead of paper that will just get trashed, you have something that is worth keeping and perhaps even better than the gift inside.

I would save them and present a lap quilt made of the various prints and solids, a pillow, or incorporate the print into a garment as gifts for next Christmas. I would totally make a small wall hanging from the cat print Chip shows.