Apologies for the indulgence. This is a huge file shrunken by dimensions and optimized to 90%. It's just that I like the name Basil.

I'll tell you something equally ridiculous.

Yesterday I had a very long conversation with a visitor who talked quite a lot and enthusiastically but had some difficulty holding a thought. He is an interesting man while conversationally flighty. One suspects drugs, but there are no drugs. He mentioned ADD and ADHD. I asked him to explain what those letters mean.  He mentioned those syndromes are grossly over diagnosed, suggesting he was misdiagnosed when a boy. And none of that diminished the value of his conversation but I could tell how it could be difficult holding employment. I can see why he's held back.

Remarkably, he looks exactly like a cartoon character on Scooby Do. I mentioned that and he didn't exactly appreciate it. He named the character. "I've been told that I look like Shaggy Rogers." He ran his fingers through his thick brown hair to flatten it and to make him not look so much like the cartoon character, but everything that he did made look more like the cartoon character. And it's not just his hair, it is his careless job of shaving. He said he used his friend's electric razor that didn't work very well. I looked closer and could see that he tried. And failed. He made a real mess of his scraggly beard. Thick wild hair, scraggly beard, rounded jaw, round bright eyes, schloppy loose t-shirt, blown out sneakers. He is 6'4", 165 LBS.

Fascinating speaking to a living cartoon. I couldn't get over that the whole time.

He doesn't believe me but he could make a million just on his looks. 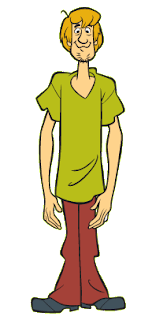 He told me he was born Dec. 1976. I noted that was our nation's bicentennial. The year I turned 21. And that's why he shocked me when he stopped talking to hear the music in the background and start singing along with Depeche Mode. He was ten when this music was popular. It's not his music. I asked him about that and he answered, "Oh I like all their stuff. All of it. I like Erasure too. How he even heard of this baffles me, far less it being his favorite. But then, it shouldn't be so surprising. I guess. I know a crossword constructor with his own books and published widely in newspapers and online who is this man's age and who memorized all the lyrics to the entire Beatles catalog. He challenged us to give him a line from any Beatles song and he will provide the next line. So we did. At least a hundred of them. And he got every single one of them right.

It was an old playlist. My laptop finished a video then went onto Christmas songs, the most annoying disjointed nonsense some station dug up from trash bins. Very annoying incongruous songs. An un-curated grab bag of crap playing in the background, so I switched to a portable loaded with an i-pod set to a very old playlist, just to make the carols stop. This is what arrested his attention.

You know more about music than I do. Way more. You may not know this song is not about Jesus. It sounds like it's mocking Christianity, but it's not. Wikipedia has the lowdown. Martin Gore said the song is inspired by Elvis and Me by Pricilla Presley.

It's a song about being a Jesus for somebody else, someone to give you hope and care. It's about how Elvis Presley was her man and her mentor and how often that happens in love relationships; how everybody's heart is like a god in some way, and that's not a very balanced view of someone, is it?

One last thing. I used this song to practice ASL for its odd challenges. It's not fast and it's not difficult. But it's odd. Thinking about what the phrases mean and then thinking of ways to show that, and do similar to the manner it's delivered in the song, to keep the beat and the attitude, I found my choices changed over time. It's such a tremendous song I don't know why it didn't chart better than it did, and I also expected the kids learning ASL to pick up this song to practice. It's a natural for that. But only one person uploaded to YouTube. And it is so bad that I got disgusted 1 millionth of the way through. The introductory fingerspelling is deplorable. It is depechely deplorable. See for yourself, if you like.

I shouldn't be so critical of young people trying. But I am.
Posted by Chip Ahoy at 12:42 PM

So that's Depeche Mode. The Eighties are my worst decade for knowing who's who.

Vasily if you're Russian.

That Depeche Mode thing is HORRIBLE.

I had a neighbor named Basil. We called him Rathbone.

He might say it isn't drugs, but it could still be drugs.

There's always someone who counts. I'm 63, born in 1954. I was carded regularly and consistently to age 35. Every woman I've ever met asks me my age. Where I was taught that is rude. The grace has never been extended to me. And now men do too. The dude yesterday, the tattooed dude I showed, the fifteen people I met before them all made some minor issue out it. In fact, the black dude said to me, "This is the reason you decided you cannot have wrinkles and look old." As if I controlled that. It's his obsession because he's comparing my face with his. All my sibs look much older than me. The youngest looks ten years older, and whenever this comes up they never believe us, and frankly, having to pull our IDs to show we're not lying pisses me off.

Ricpic , you're impossible! Stop being impossible right now. And start being possible. You didn't like La Vi en Rose and you don't like this. Two excellent things to love and you reject them.

And that attitude ages people.

Depeche Mode has so many hits it's rhe-DICK-a-liss.

Although I'll admit British dudes as western dudes almost never works. And they just don't cut it in the video.

We love them for Strange Love.

We adore them for People Are People.

Never Let Me Down Again

The great songs are endless. You can sing along with every one of them because the range is so narrow and the vocal skill not all that great. Every single one is excellent to practice translations with.

Listen to Never Let Me Down Again.

And now I want to tell you a little story.

Good Lord, I was ill and not expected to live etc. etc.

Back on my feet but just barely. Depeche Mode comes to town. My friends at the time knew about my affinity for this band’s music. We got tickets to go. We used my handicapped placard (that actually helps me place when this happened because I delayed getting that thing expecting I’ll recover enough to not need it. I didn’t identify as handicapped, I didn’t accept it, but then I got tired of everyone taking my parking space and schlubbing groceries half a block. Boom. I had my own personal space right in front of my rented property with very tight parking all around it. Mine. Mine. Mine, all mine.)

Giant auditorium. Gigantic crowd. And I mean GIANT!. People my age, older than me, and mostly much younger. Some younger by half. This band attracts intergenerational fans. We park smack in the front. The most convenient spot possible. An open space just for us. We pour out of the car.

My friends realized themselves, without any discussion, without any planning or verbalized coordination, they all just fell into line surrounding me. They took up positions around as coordinates and held their positions, close but not too close. A very well-formed encirclement. They self-formed into a force field around me and my strange movement with two canes and proceeded at my greatly reduced pace, through a dense Tokyo Museum -like crowd except moving rapidly and fluidly like a Colorado River, like rapids.

And all these mostly young people in the moving hurried crowd are so incredibly situationally aware. Nothing at all like a crowd at, say, Taste of Colorado, where people are wandering aimlessly in their own bubble and not aware of people around them. No, these concert young people parted like the water did for Moses as depicted in film. None of them bumped into my human forcefield. Nothing touched my body. There was zero interference. Each oncoming individual took note and took evasive maneuver around us. I must draw you a picture because that was quite incredible.

My human forcefield saw me safely to our seats and then did the same thing back to the car.

Of all the notable things at that concert, they played all their hits, and their hits are endless, that brilliant human forcefield is the most notable, the thing that sticks out in my recollection of the event most predominately.

My friends really can be brilliant. When they’re not being idiots.

Evil, I wondered about that. I did speak to him a very long time and I interrogated various ways and consistently a picture formed of dislike of all types of drugs. He came in with a coffee, which is one drug I don't like, so I go, "What about coffee?" He goes, "That's the one thing. But come on, that's not really a drug."

Johnny Cash did an excellent cover of this on his American Recordings IV album.

I join the list of those sprung from high school and its pomp and circumstance in '72, to land on the cusp of change.

Numbers truly do fly in and out of my head like pigeons, along with facts. Putting two and two together would have required me to thoughtfully conclude ChipA couldn't possibly have crammed his many life experiences into the 30-40 some years hinted at by his avatar. Even with the facts and numbers in evidence to lead to such a conclusion, an accumulation of over sixty years of living hadn't fully settled into my awareness until this post.

Where ricpic landed on one set of numbers, I got tripped on another, completely beside the point of the post as I decided I wouldn't have had the wherewithal to cast out a line five times much less one hundred to test for an appropriate Beatle response.

That said, I appreciated the link to the song and the explanation. I lost connection to music during the 80's due to a focus on children that precluded other interests.