I told a friend she's from New Jersey, but that was wrong. She's from Jamaica and moved to Syracuse N.Y, at age thirteen.

The friend is a musician with ideas of producing his own album. He's good too. Interesting songs that are not rap. Regular traditional style music. He's asked me to help with photographs for a cover and I agreed. I was interested to find out if I could get his tattoos to show. They do, and under the worst lighting imaginable and with ISO cranked way up and conflicting sources of dim light. Just sitting there talking. 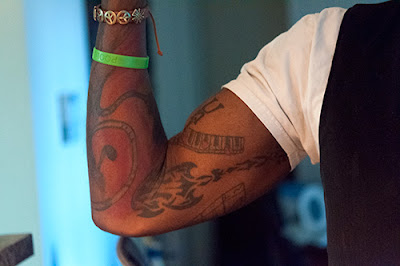 Notice the drum, and guitar, and piano keys. He struck a dramatic pose, such as Erté or more accurately like an Egyptian, profile and arm like this except higher and with parallelism, too briefly to photograph, and he asked me, "What does that remind you of?" I answered, "Grace Jones." He suddenly became more animated and said, "Yeah! That's what I'm thinking."

I love this so much. I love every aspect about it. In my view it holds up very well. One time I mentioned this at TOP and my remark was attacked by some fuddy-duddy who believes Edith Piaf' s original is much better, hers is real music, and this is just trash. How rude!

She was memorably weird but actually pretty nice. We had a long discussion about Thomas Mann and Karl Mays and he relative differences between the two.


In the end she sort of agrees that Karl Mays was the superior talent.

Good singer. Very hard though to get past her startling appearance. Hey, I calls 'em like I see's 'em.

Who the hell was Karl Mays?

That is a very good version of the song. It stands on its own.

I always liked Grace Jones. Good on Troop meeting her.

I met Grace Slick and we talked about Willie Mays.

No I didn't, that's a tall tale. I met everyone else in the original Jefferson Airplane but Grace was too snooty or drunk to meet the regular folks.

Gordon Lightfoot visited the restaurant where I worked during college, sat in the station next to mine and ordered the house soup.

That's as close as I get to a one on one with fame--the la bee on hose, size up the fruitcake version of being almost but not quite there. No cigar, cheep or otherwise.

Way out! Going on my favorites list. Thanks Chip.

Mireille Mathieu has an acceptable version too though I don't really like the song.

I like smart, tall and hefty women. I always saw her as ~6 foot tall. Trooper can tell us.

I saw Grace Jones in a gay bar in Madison when I was like 17. I thought she was a drag queen. I saw divine at the same bar. Those bitches performed in rough joints. I like slave to the rhythm by jones

He was a German author who wrote westerns in the style of James Fenimore Cooper.

The are verge nteresting artifacts of a bygone era.

Hey Sixty will appreciate this. I misspelled his name.

It is Karl May. Not Mays,

The Willie is not his son.


The chair is not his son.


He sold more than 200 million books in his lifetime.

Just goes to show you.

Don’t post on your iPhone while you are sitting on the toilet.

Supremely Eighties video. It's a keeper.

If you need another reason to hate the NFL, watch that call at the end of the Steelers/Patriots game. Worse call I ever saw a stolen game. It ended like a lot of boxing matches - in dis"grace". See how I brought that back on topic at the end there? That's commenter skills at the pro level.

That means more than you know.

There appears to be a number of people who stop by Lem's to read, in addition to those who comment often. Some come and go randomly, some seem to be regular readers who rarely make themselves known, and some show up to comment loudly, bizarrely, humorously, seriously, angrily, companionably, sincerely, insincerely; it's what makes "us" us and turns this blog into something more like a community than a club.

I wish more of our visitors would comment. I promise I will be nice.

Look Nick and Sixty and I haven't feuded in months.

Plus bags and april have graciously conceded that I was right about the God Emperor all along.

His performance will ensure that he will go down as the most conservative president since Calvin Coolidge.

Even more conservative than Reagan.

He will appoint more conservative judges. Open up more oil fields. Let the market work on the Internet and energy. Bringing back manufacturing jobs. Boosting the stock market. Cutting taxes. Returning federal land use to the states. Deporting criminal aliens and trying his best to fix immigration. All with a bunch of traitors and quislings in the Republican party who would sell him out in a minute.

If you focus on what he is doing instead of the tweets he uses to distract the dumb liberals you will agree that your vote on Trump was well done. Cruz, Rubio, Jeb or Kacish would never have done a tenth of this.

Yes, everyone should feel free to comment. I've always felt like the least knowledgeable commenter here and nobody's picked on me. Yet.

We need some new voices. Specifically some liberal ones. Most of the dedicated liberals who used to post here have moved on to greener pastures.

We could use a little diversity of opinion. Plus a few laughs.

Chip Silicon reads the blog and sent me a nice note via another venue. He's a very smart and good man.

Yes, he is, Nick. I've always admired him.

Also, I'm glad to hear about the gene therapy type meds for melanoma. It's amazing the secrets science is unlocking.

Ritmo has left the building. I guess he has found other places more congenial.

Or one of his Brazilian bitches shanked him.

I wish Dust Bunny Queen would come back. Her posts summed up everything sensible on any and every issue she posted about. Maybe she ran out of patience with the fools - not me! not me! - that post here. Or was it Dust Bunnie Queen? Either way she's the greatest. Come back DBQ.

Hey, I can role play the liberal part. I was schooled in Madison and actually used to be one.

deborah, Thanks. Science has finally realized our bodies are super computers that just need additional software.

Folks like Chip and DBQ get fed up w/ the nonsense, which I understand. I have contributed to the nonsense and also gotten sickened by it as well.

I think this board has strong personalities all around. I don't think we need more liberals, but less politics, like Trooper's place used to be. Except election years when we'll go crazy again :)

DBQ's email comes up with her Blogger name. I wrote and told her she was missed. While I appreciate her perspective, writing and clarity, one of the traits I most admire is her ability to shoot straight.

In doing so, she often hits the heart of the matter.

Trooper's place had a Big Top carny atmosphere, a house of mirrors vibe where things were often not what they'd seemed, and touching the toilet seat, door handles and arm rests was ill advised without some antibac in the pocket. He pulled in and hosted some unique and spectacular shows, along with some good writing and connection present. Fun but different in tone I'd hope from a blog focused on Levity with Gravity pulling in alongside for the ride.

I have all of Grace Jones' albums. I love them all. I'm not gay. Thank you.