Care to hear something stupid?

I bought four things on Amazon together so they could be delivered at one time. But instead Amazon made four separate deliveries. Their new way of doing things causes me to track them excessively because they could be left at my front door or even downstairs inside our secure front door. But those two place won't stop inside thieves. Sometimes a package sitting there is too tempting.

Two on Sunday. Quite careless, they were left on a table at the front door. Anyone passing could have just taken them. I saw the second package by chance by my walking out the front door downstairs.

Today I'm expecting the electric pressure cooker that you see advertised all over the place. I'm eager to try it. My regular pressure cooker is unbelievably useful. Lately I've been using it for rice. Cooked in a bowl with measured water on a trivet inside the pressure pot with its own water. It's fast and it's flawless. And I don't even have to clean the pot.

Today I invented a lunch. But first I checked Amazon package tracking.

Brussel sprouts with bacon and tofu cubes in soy broth. Same thing with the sprouts as the rice. Sprouts are quartered and put in a jar with water, on a trivet inside the pressure pot with its own water. Brought to 15 lbs. pressure, then brought right back down. No timing, actually, just up and down.  The water in the sprouts deglazes the bacon messed up in the pan. Cubed tofu added. To turn the water into broth, 2 teaspoons soy sauce, 1 level teaspoon sugar (I'm out of mirin), 1 teaspoon fish sauce, 1/2 teaspoon toasted sesame seed oil, 1 teaspoon maple syrup because the jar was right there.

I know I'll get boos for tofu, but so what, this is delicious and very easy to eat. If anything, this would convert you. Odd making broth without chicken stock or beef stock. 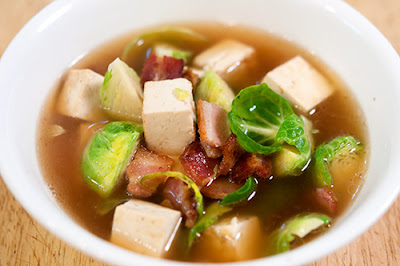 I'm turning into my mother in the years before she passed. We finally got through to her that she cannot compare tips today with what she earned in her youth. The whole socioeconomic backstory has changed. In her last years she began tipping wildly shoving bills at nurses and hostesses, gas station attendants, car maintenance people, DMV clerks, government workers, meter readers, everybody she came into contact, anybody who did anything for her.

This holiday season I doubled the usual tips, so much as half the cost of the service. And it feels great because they're not expecting it. Ten bucks tip for the pizza deliverer, for a pizza delivered to somebody else. Ten bucks tip for a haircut and so on. Tracking this package, and reading how overworked Amazon deliverers are, two hundred a day with no toilet breaks, if that can be believed. I pulled out a ten dollar bill to have waiting. But now it's into the afternoon, so I thought, what the heck make it twenty for Christmas these people are really hustling. I put the ten back and took out a twenty. The twenty dollar bill is waiting right at the door to pass to the Amazon deliverer. After lunch I check Amazon. "Your package has been delivered at your front door." They delivered when I was right there at the door making this Brussel sprouts and bacon soup. I open the door and there is the package. Had the driver just knocked on my door I could have given them their twenty dollar bill. But they didn't knock. They just dumped and split. Like a cat. No knock. No tip.

And that's very stupid.
Posted by Chip Ahoy at 3:03 PM

Can you pressure can with the electric pressure cooker?

You can make a tasty stock using shrimp shells, but whatever you do never make lobster stock out of the shells indoors and outdoors, not within 100 feet of where people live. The smell is horrendous.

Consider having stuff delivered to work (if that's possible). Otherwise, Amazon will deliver to a locker near you. Just "bing" "Amazon locker" and that will get you to the page. Over 2000 locations across 50 cities, accepts deliveries and returns. Etc.

You constantly make my mouth water.

Yes, you can pressure can. However, most aren't large enough for more than just a few jars, probably 4 or 5 max.

I even baked in it.

The batters were delicious. Whipped eggs and sugar for like ten minutes then browned butter added. I kept thinking it would make a fantastic sauce for fish and possibly chicken. An incredible substitute for hollandaise over eggs Benedict.

Finally cooked it stovetop in the pressure cooker and voila! Perfect.

My problem was Mile High low air pressure and no other correction would work.

Then I realized, this cake is terrible. It's just sponge for some other syrup. The whole point is to drown the cake with flavorful syrup like a sponge. Genoise is much better as batter than it is as a cake. I must be missing something because I could not taste any advantage over boxed cake.

It took over 4 dozen eggs to learn that. To all those chickens, I apologize.

I'm turning into my mother in the years before she passed.

It's the last stage of Growing Up. That moment when you say to yourself, "I sound just like my father/mother".

Was the delivery that arrived outside the door on tipless cat feet bigger than a breadbox?
Was it the electronic pressure cooker?
And might that cooker be an Instant Pot?

If so, it's a good thing it didn't get swiped. It turns out the 6 quarter is close to impossible to find online. Amazon, Target, Best Buy, WallyW, Kohls, JCPenA, they're all either out, not shipping or shipping in 2-4 weeks. Target hints there might be a few left on the shelf, but I'm falling for that, not when everyone else, including the Big A is completely out.

For good or ill, there I was in the Holiday Hunt for something that sounded wonderful, desirable, and worth having, with the additional push of being hard to find. Something I didn't even know I wanted to give away for Christmas until mention of it popped up here in a Holiday Tip.

Hopefully hearing how well this magic pot works and serves another will be able to get me through the disappointment of not finding one online in time to have it silently show up at my door.

The regular one you have to be right there to monitor it. They'e a bit insane because you bring them up to pressure and then cut the heat way back to low as the stove can go. It's nearly impossible to keep it so low without it building up pressure. So you cannot walk away.

Tonight I used the electric one and it's a 'set it and forget it' deal. It builds up then starts counting, then goes down to warm and holds it safely. You're free to go do other things without the need to keep monitoring it. I cooked a whole chicken and then cooked chicken broth very easily and without stinking up the whole house from a few hours of cooking.

The 6 qt size would be a very nice gift for someone.

Even the smaller ones would be a nice gift. What the heck.

Tomorrow I'm going to cook a kielbasa in two stages. A long one to overcook the sausage how I like them to nearly dissolve, then again on short cycle to cook it again with cabbage and potatoes and onions.

I don't trust my neighbors anymore. Previously I considered them too high class to steal packages. But they did twice. Someone on my floor stole my waffle iron. (the replacement is ace. I love it.) Plus my gas tank was drained, plus two welcome mats were stolen.

There now. Problem solved. It's amazing what a post on tips can do. Along with a shift in thinking. Turns out the 8 quart size is more available than the 6 and will supposedly be in stock and ready to fly off the shelf on the 20th in order to wing its way to our doorstep by Christmas, or so it's planned, with MrM the soup and stew maker about to receive an electronic invitation to new inroads in food prep. Will see how it goes.

We had a fearsome pressure cooker when I was growing up, with a top that spun around and if I remember correctly whistled. Whatever it did, it was scary enough I was not inclined to use one later in life, even though my neighbor swore by hers, so this will be a new
experience.

Believe it or not, this was the shot of steam I needed to jump into and complete the rest of my online shopping, with the IPot being the last order placed, as the surprise item that will be fun to open, read about and try.