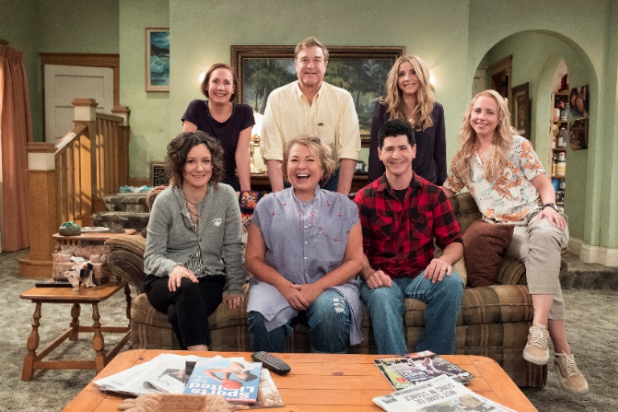 https://www.thewrap.com/roseanne-revival-gets-march-2018-premiere/
Posted by deborah at 11:41 AM

Which one is John Goodman?

We need this again?

Bad enough movies can't come up with any new material so they make bad remakes out of good TV shows, but remakes of bad TV shows?

Good question. Looks like he has a new lease on life.

Has anyone seen the HBO sitcom with Laurie Metcalf, 'Getting On'? She plays a spazzy doctor in charge of a geriatric ward.

A show that I've never watched.

deborah, "Getting On" was a hilarious non PC comedy that was not promoted well by HBO.

Riches to rags that is.

Yes, Nick, it was excellent, and Metcalf brilliant. I have the third season from the library, but it won't play.

Allen, I watched it and enjoyed it. Reminds me of the time my sister came over and I was watching Mama's Family, which I thought was a good sitcom, but my sis was surprised I would be watching anything so declasse. She said, "Deh-Bee!" On the other hand, she went to a Hillary rally two days before the fall.

Chick, her reality show filmed in Hawaii was awful, and I don't even know if that was her low point. I wonder how this one will do.

Edwaard, don't go all superior on us. I know you binge watch old reruns of General Hospital and have a big crush on Jessie Brewer.

Straying from blonde to brunette can be exciting. I recently switched from Gunilla Hutton to Lisa Todd.

debooooorahhhhh!!! After a dick move of welcome and another retreat, you're baaaack!! With Roseanne in tow! And just in time for a Christmas Deh-beee-butte with old Nicks!

As it is, I'll welcome you with words and wreath of ;)'s

haha. JOhn Goodman is the one sitting in the middle.

Allen, it was based off an old Carole Burnett skit...you had to be there.

Roseanne gave Norm Macdonald a break and hired him as a writer and bit part.

Too cool. Macdonald is one of my favorite comedians. Have you heard is Janice bit?

deborah, No I haven't. But I've been binge watching Norm Macdonald Live. Almost all his guests are NOT liberals. Norm is incredibly smart and off beat. He speaks openly about his gambling addiction.

Have you ever seen his short-lived sports program, What the H? Wish they hadn't canceled it.

This show was fun for the first couple of years and then it got depressing and then it got stupid. Haven't these people picked this carcass clean already? Come up with something original!

Agreed. I had stopped watching before Dan died and the lottery stuff. I have an open mind about the re-boot...we shall see.