When you hire orcs.....you get about what you would expect.

Fake street signs have been popping up in the Twin Cities — warning people of “easily started” cops — following the fatal shooting of an Australian bride-to-be by a Minneapolis police officer. 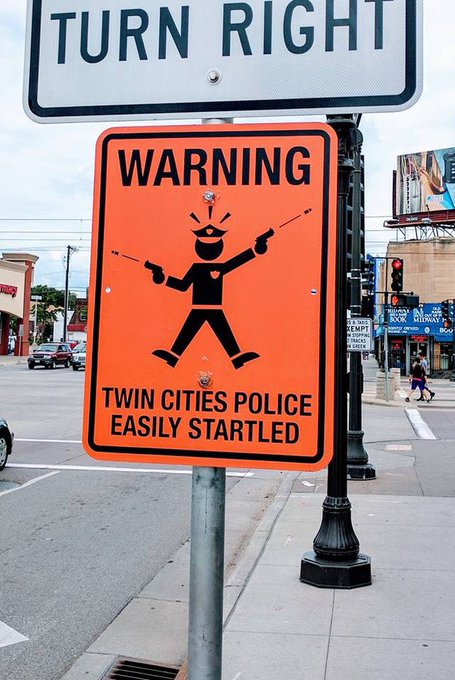 At least two signs were spotted over the weekend, one of which was still standing on Sunday night, according to the Star-Tribune.
To drive the point even further, they each featured an image of a cop — wildly shooting a pair of pistols in each direction.
One of the signs was photographed in St. Paul and the other was reported in the Cedar-Riverside neighborhood of Minneapolis, the Star-Tribune reports.
The sign in St. Paul was later removed after pictures of it began circulating on social media.
“There’s a side of truth to the sign,” local resident Joe Morino explained after taking a picture of the one in Minneapolis.
“That tells you there is something wrong with the system.”
The signs appear to be a direct reference to the July 15 killing of Justine Damond at the hands of Minneapolis police officer Mohamed Noor.
The cop’s partner, Matthew Harrity, told investigators that they were both “startled” by a loud sound just before the shooting occurred.


Damond — who called 911 that night to report a possible sexual assault unfolding in the alley behind her house — had been trying to speak with the officers through the driver-side window when Noor began blasting and shot her from the passenger seat.
“I think it’s great that it’s getting attention,” resident Derek Traxler told the Star-Tribune of the signs blasting cops. "There hasn't been a scandal like this since the 1970's when they shot that girl Mary in the twat for throwing her hat in the air. It just goes to show you that cops should only be big fat Irish guys. How can you run a department when the chief of police  is a muff diver anyway. What a mess. I am going to move to state where they have professional police. Someplace like Alabama or Mississippi. Enough with these Somali shitheads."
A photo showing the St. Paul sign, which was shared on Reddit, had garnered more than 700,000 views as of Monday afternoon after landing on the website’s front page.
It is unclear who is setting up the signs, and police said they were initially unaware of their existence.

Hey, Minnesotans, you can thank your Lutheran Love A Neighbor Six Thousand Miles Away Societies for bringing them in.

The signs are for real.

I'm wondering who or what constitutes an "orc"?

And I'm too busy feeling thankful for those who helped MrM's and my great grandparents legitimately settle in the US, find work, make an honest living, and raise a family in freedom and safety, to redirect my thanks to the Lutheran Love a Neighbor Society.

While I can understand and accept bursts of anger and am good with playfulness that walks close to the edge, I am not ok with focused contempt and degradation that deliberately and continually labels other humans as something less than an animal, or at least a mammal.

Orcs are savages who are not Men of the West.

They are barbarians and savages who believe in things like ritual female genital mutilation. To pretend that they are morally equivalent to Christians or Jews is just foolish.

Orcs are not animals. Rather they are another species altogether. Savage. Bestial. Barbarians.

Not Men of the West.

Mama M you are a good person.

I am on the other hand a nasty xenophobic racist.

The signs are grade A trolling.

Thing is, the Somalis, and other Moslems, and the Latin American illegals were imported by President Pissy and the Beast to bring the people who built this country into line with the Lefty agenda and have gotten every encouragement from the Lefty establishment to hate Americans and flash the attitude that they are now in charge (if you remember the motto of freed slaves in the South right after the Civil War (De bottom rail's on de top and we's gwine to keep it dere), you know where this is going).

Take a Diversity Hire from the ranks of America-haters, give him power and a gun, put him in a prowl car with another rookie, and you have at the very least homicide by incompetence.

And probably a lot more.

PS Along the lines of law and order, the WaPo can't wait to tell us who the next AG will be.

First, it was Rudy (so you know it won't happen, the WaPo just wanted to get Troop's hopes up) and now it's The One True Ted. It may happen one day, but I don't think it's today.

I think Trump is trolling DC.

In Tolkien orcs are men who have been tortured and twisted until they are evil.

When the Lord of the Rings movies came out there was a ridiculous controversy in which hacktivists claimed the movie was racist because the bad guys (the orcs) were "black". This was contra the actual original text by Tolkien as well as the objective presentation on screen.

Remember when the Left was up in arms about the killing of Philando Castile? (Perfectly legit, by the way; so were many on the right.)

So this latest shooting would seem to be cause for even more outrage, right? Right guys? Guys??

I know this Father, both shootings were from "minority" police officers. Coincidence? Well, a week before this shooting of the woman, a black (from the hood) police officer in Minneapolis shot two dogs while in the back yard of someone's house, and said the dogs charged him, video security camera proved that that was a lie.

Father forgive them for they do not know what they do.