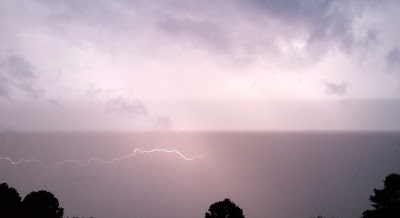 How does lightning go sideways?  Perhaps Sixty can explain.
Posted by chickelit at 11:22 PM

Any of yous eyetalians know a tomato sauce recipe wherein you cook down whole tomatoes with seasoning for several hours and then add in a mixture of sauteed rosemary, onion, garlic before serving?

I just watched an episode of Samurai Gourmet where our hero and his wife go into an oden style restaurant and she has tomato oden - boiled whole, served whole, eaten with chop sticks. In a later epi he topped that by going to an Italian restaurant in Japan and trying to mimic western manners and etiquette. Good one.

Anyway, when I took that picture I was standing in the door of my shop watching the thunderstorm, trying to get a picture of the nearly constant lightning flashes using my slow as molasses phone camera. I would mash the button and hope that by the time the picture was taken that a lightning strike would occur. That picture was taken facing east, the storm was heading from west to east and had passed over (ha!), and there was a lot of cloud-to-cloud lightning. Also, if you watch enough lightning you will see all kinds of things - ground-to-cloud, cloud-to-ground, cloud-to-cellphone-holding-guy - no, wait, skip that one.

What I like about that picture is how the phone reacted to the stroke of lightning - it is dealing with the sudden increase in light the best way it knows how, in horizontal gradations of exposure.

Thanks for the info, Sixty. It looked to me like your studio faced the ocean. Now we know the truth.

What chick said. Confusing because the lightning seems to be flashing parallel to and below the horizon line. Which I too took to be a body of water. Did Sixty clear that up? Not to my satisfaction! :^(

Okay, let me see if I can clear up some of this. My shop does face the ocean, but it is 150 miles away and at least 50 miles west of the fall line, so I can't see the Atlantic from here. Not even on a clear day.

Lightning travels through the atmosphere at roughly 3,700 miles per second. Fast. The shutter lag on my phone camera is about a half second. Slow. So I mash the button and hope that lightning strikes in the next half second or so. Sometimes I get lucky. Mostly I miss the event and end up with pictures of black sky.

So, assuming the "aperture" is open when the sky lights up, and you have taken a picture of a lightning strike, then you have to consider the technology used to put a camera in a phone.

First of all, there is no aperture (with the exception of Nokia) so what phones do is power up the CMOS sensor, which is slightly analogous to the film in a camera. But, and this is the big but, since there is no aperture to expose the "film" all at once there is a time lag between when the first pixels in the CMOS sensor array fire up and when the last ones do. When you are taking a picture of something moving as fast as lightning the pixels receive varying amounts of light due to the almost infinitesimal delay across the array.

Is this making sense? Lightning is very fast, and even though the time lag between when the first pixels power up and when the last ones do is negligible and therefore not apparent in most cases, it is glaringly obvious in this case.

The horizontal stripes are artifacts of how the sensor powered up. Some first, some in the middle, some at the end.

And during that lag, the sky, which was black at the beginning of the exposure became extremely bright by the end, and the sensors reacted, albeit in their own sweet time, and what you are seeing are the results of the rapidly changing difference in brightness versus the (relatively) slow reaction of the CMOS sensor.

Back when I first started designing CMOS transistors, back in 1984, they had 5 micron feature sizes. You could resolve them with the naked eye.

Now the feature sizes are in the range of .13 microns or so. You can't see them, but they can see you.

Further reading on this subject can be found <a href='https://micro.magnet.fsu.edu/primer/digitalimaging/cmosimagesensors.html>here.</a>

I am glad I am out of high tech and now the only chips I make are wood chips.

So, in summary (thought I'd never get there, eh?) - that is a picture of the sky. My camera was pointed up about 15 degrees above the horizon, the camera saw nothing, then a lot of something, then the lightning, having struck, moved on. As I recall, that one was about two seconds away, using the Bob Segar method of measuring distance.

Uh oh, I screwed up the perma link. Cut and paste, but be warned, the tech speak gets deep out there.

So in other words that picture, which jazzes up a sky which seen in "correct" time would be mundane, IS A LIE! ha ha ha

The purpose of art...
O what can it be?
A lie that adds interest
Has earned its fee.

Well, the gradations of light are created by the array of CMOS sensors that captured the lightning strike.

The lightning, on the other hand (and I hope it never is) is beauty created by nature. It is anything but static.

There was a severe storm warning in Missouri one night when we were camping back in the 70's. It started to lighting big time and since we were only in tents, we packed up and headed home. It was a 50 mile drive and the most magnificent fireworks display I have ever seen. Constant streaks across the sky. No rain. Never seen a display like that before or since and it lasted the hour drive.

Never seen a display like that before or since and it lasted the hour drive.

No. Are you drunk? Employed?

What?
Stop channeling Ritmo, Spinelli.
Ed is right about that one. And if you can't deal with that, look in a mirror.

Chick, every time I get into a battle w/ someone here you stick your ass into it. It's a fucked up pathology, chicky poo. You want to poke me like the cunt, tax man, ed and ask cunt girl, passive aggressive questions, "Were you stoned" then you will get it w/ both barrels. I think you're a masochist because we go through this every time. You don't seem happy unless you are a victim. And I'll repeat my question, were you drunk when you asked that passive aggressive question of me last night? I know you were. That's when you get nasty and ask nasty question, and getting nasty while drinking is a YUUUGE red flag. You're an easy read, chick.

My problem w/ ed is not about cannabis. He's a cunt and does not want to apologize for his sanctimonious, judgemental, ignorant, comment on the oipiod. He's using the cannabis as a pretext. We have battled on cannabis for years. He knows he was wrong. He doesn't have the integrity or self esteem to admit it. Now let's end this fucking soap opera. You're a fucking busy body. Just butt the fuck out, or hold on tight. I'm guessing you'll double down because you like the abuse on several levels. Don't ever forget my profession. I pretty much got everyone here pegged.

Maybe Mama will come to your aid.

And I'll repeat my question, were you drunk when you asked that passive aggressive question of me last night? I know you were.

Nope, I came home from work feeling ill. I went to bed and then woke up later, checked this thread and saw your ongoing acrimony with ed. I'm trying to cut it off at the knees.

Well that went downhill rather rapidly.

So, does anyone want to discuss semiconductor physics?

When wells are created in the silicon substrate the process is called "doping".

There you have it, yet another boron subject.

And I have to tell you, that last pun slayed back in the '80s.

@Sixty: Sorry for the distraction. If you want to discuss boron doping and group 14 elements, let's talk blue diamonds.

I finally saw the Hope diamond a few years ago at the Smithsonian.

How cool is that, eh? I have been looking at that diamond since it was first put on display. The hall of gems is a wondrous place. The big red diamond, the big yellow diamond, and of course, that chip off of Jean-Baptiste Tavernier's old block.

Two hundred pound topaz sitting around, Marjorie Merriweather Post's collection, and on and on. I loved that place and were I a travelin' man, I would go again.

So lattice be thankful, and how do they alter the color of non-colored stones? I was thinking vapor deposition but now I see they use High Pressure High Temperature to do that. Cool.

Now all I need is a 44 carat white stone and I can make my own Hope Diamond! Curses, foiled again!

Strontium 90 fell along with the snow back in the 1950s, but that's another subject.

Sixty, My bride showed me your photos. You got the eye. This is probably pedestrian to you, but I hunt sea glass in the rocks on the beach. My creative bride makes jewelry. There is a dearth of green glass where I hunt[Mission Beach]. But today I found a cobalt blue. Keeps my eyes off the thongs, well somewhat. God bless the thong fashion!

I hear ya, bro. Around here it is yoga pants. May God bless cultural appropriation.

I do okay with the pictures, I like taking them, I was trained to see, not that I claim any real skill or talent, but I got tossed out of Instapundit for mocking his hideous, talent-free pictures. He would post that crap and his sycophants would tell him how awesome he is, but when I pointed out that he spent $2,000 on a camera and he takes snapshots that a freakin' Kodak operator would not have bothered to develop back in the 1960s, he got bent out of shape and banned me.

That's okay, because as a photographer he makes a fine law prof.

A thin skinned law prof. Knock me over w/ a feather.

III/V, baby - those were the groups we used.

Roman numerals are so quant -- so 20th century. Get with the novem nomenklatura, baby. Add X to all those placekeepers.

Now what sort of tung oil should I buy to show off my wood (Doug Fir)?

Say what you will about the Frozen Bint, she, at least, takes decent pictures. Dumber than a bag of hammers, but she was trained to see.

Totally missed the grift, but we all have our blind spots.

Si, indium, aluminum, gallium. those were the ones I had direct experience with.