From Page to Screen Part One 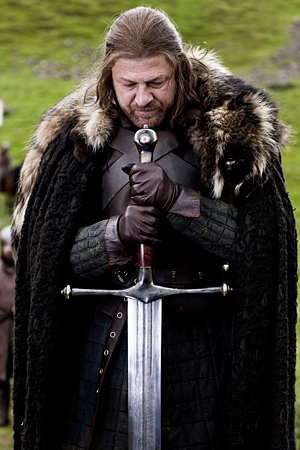 It is always very interesting when one of your favorite books makes it onto the screen be it TV or movies. You always wonder if it will be portrayed the way you imagine it. Before the extensive use of CGI and computer effects it was never even attempted. Large scale epics were just way too costly. Only big budget movies could even attempt it.

But it is all different now. The Lord of the Rings being the most prominent example along with Jurassic Park. Computer generated CGI lets you have armies of orcs and elves and dwarves. Even a pissant little series like “Once Upon a Time” can really generate great special effects at a much reduced cost. So books that you never thought could be on the screen are suddenly viable. What is interesting is the ones that they choose and the ones that are successful.

The one that most people point to is George Rape Rape Martins “Game of Thrones.” It has become one of the most popular and talked about fantasy series of all time. Most of it is pretty true to the books. The problem for them is the Martin is famously lazy and can’t seem to produce more books for the series to produce for TV. They caught up to him pretty quickly.

I saw the first couple of seasons and I was sort of impressed. The wife couldn’t follow it so I had to keep stopping to explain who this person and that person was in the story. The exposition was piss poor at best. The special effects were great and the scenery in Croatia and Ireland and all the places they filmed was spectacular. They were pretty true to the book which is unusual for most TV adaptations of Science Fiction and Fantasy. Eventually I dropped HBO and stopped following the series. I might pick it up again when the full series is on Hulu. But I don’t think I am missing much.
It is pretty funny that I featured Neil Gaiman in my “Whose that Author” segment because the rumor is that he is going to finish writing this series because Martin just can’t get it together. From Vox Day’s blog:
George R.R. Martin's "The Winds of Winter" is one of the highly-anticipated novels and fans are hoping to get their hands on it this year. It is the sixth novel in the fantasy series "A Song of Ice and Fire" and HBO has previously hinted that it's one of the priorities as a wild card. Recent reports say that the author has been busy finishing a charity work as well as a film studio in Santa Fe, Mexico. However, a new report is claiming that "American Gods" author, Neil Gaiman is now the one writing the novel on Martin's behalf.

Earlier reports from Celebeat suggest that "The Winds of Winter" might be out in June, which is at least a month before "Game of Thrones" season 7 premieres on July 16. It is said that Martin is just finishing a charity work and then he will focus on writing the novel. Now, it is said that Gaiman has been spotted at Martin's hometown many times, leading fans to believe that he has been writing the novel.

There are also reports suggesting that Gaiman might be Martin's editor for "The Winds of Winter" and this could be the reason of his visits at Martin's hometown. However, these claims are yet to be confirmed and the fans should content themselves for now that the novel should be out within this year. Apparently, Martin is busy at the moment with his film studio in Mexico, which will be available to Hollywood production as well as film entrepreneurs.

I think it is vastly amusing for all of Martin’s bullshit about writing and the Sad Puppies and what not that he can’t finish his magnum opus. It is what will define his career and he just can’t finish it. What a jerk off. It is a pity that of all the great series in Fantasy that his tale of rape, incest and cruelty is the one that got the big payoff. It’s really a shame. I wish some of my other favorite authors would get the same chance. But it is not to be.

It just amazes me who wins the lottery. What a fucked up world.
Posted by Trooper York at 7:05 PM

Labels: From page to screen, Game of Thrones, Whose that author, writing

Shouldn't a Person of Color have the opportunity to finish this epic? Who is GRRM to decide, much less decide on this male person of nocolor? Bigot!

The books of course have dragons and magic, but that stuff sort of takes a back seat to the politics (which is pretty close to things that occurred in the late middle ages). The TV show is way more graphic on sex than the books. George R.R. Martin deserves credit for his work to date on this, it was a hell of a universe he thought up (better than Vincent under NYC). But writing this sort of thing is a young man's (or younger man's) game and it is tough when you are fat and like to go to comic con events and watch football (he is a Giants fan).

He is probably afraid of putting out schlock and getting lambasted. So he ends up freezing up.

I would give him a pass. My guess he has the story arc laid out (apparently he shared it with the TV show runners) and Gaiman would do a hell of a job finishing off the books if GRRM ends up like many of his characters.

CGI has its limits and once those are reached, we venture into the risible.

Yeah, well, Alexei Panshin published the first three (of a promised seven) of his wonderful "Anthony Villiers" novels in 1968-1969, and I've been waiting patiently for the next one ever since. That woman in Stephen King's "Misery" was crazy, granted, but I'm sympathetic.

I bet authors get tired of the worlds they create in situations like these involving t.v. and movies.

L. Frank Baum wrote a whole bunch of Oz books. Probably fun until it became a demand and he's all, "F me, I'd like to create something else but nothing else will do compared to the payoff of this."

I bet that happens with cartoons. There's only so much Frank Hill and his wife and friends a guy can take before he burns out.

I fear for the fortitude of the writers of the Belcher family on Bob's Burgers. There's only so many things unique to a resort cape town that can be explored before they're all done and writing about a family that stays locked in their ages over seasons, that cannot grow up, must grow weary and heavy upon a team of writers even when that team is refreshed.

And yet they surprise me.

An episode is about an aquarium shop. And all the things in there were tremendous interest to me. And I thought, "Holy shit, they're going to just keep right on thinking up new situations, apparently their imaginations are boundless." I hope they can keep it up.

That is a big sword.

Indeed it is - I saw a large collection of Claymore swords in a museum in Glasgow - they were impressive, to say the least.

I think he uses it to lob off someone's head in Season One, Episode One.

I don't see anything wrong with using a ghost writer. Nobody read Rape-rape for his prose style.

The problem with the TV series is you have people coming back from the Dead. That hurts the show since its hard to care if you favorite character will die, since they can always come back. Zombie John Snow.

rcocean, there is supposed to be a resurrection thing with Jon Snow (more Lazarus than JC). You can't have too many resurrections or things get confused. The show runners chose not to bring Lady Stoneheart back.

i enjoy the show immensely. It's not a figure of speech to say that some of the scenes were literally cliff hangers. What is unique about GOT is that it's better watching it the second time around. It takes two viewings to understand what's going on. There are some extremely complicated relationships and plot twists..... There's a kind of reality to the magic in GOT. In the late Middle Ages, people really believed in spells and witches and strange creatures so it is true to the world in which the characters lived.

That sword that Ned Stark has ends up being reforged into two swords, one of which Jamie Lannister gives to Brienne

The whole Valarian steel in the book is a play on Damascus steel or Japanese swords, but of course in real life Damascus and Japanese mental work is about the craftsmanship and folding of the steel to capture the properties of flexibility and sharpness. The reason Valarian steel supposedly kills White Walkers (like obsidian) is the rumor that Valarian steel is made with obsidian.

Silica can be used in steel production, but it is limited value. Manganese is a much better alloying agent.

And once melted, obsidian is nothing more than silicon. Obsidian makes good edge tools because it does not have a crystalline structure - that is - you can make good use of its conchoidal fractures. Once alloyed in steel it loses all of its obsidian nature.

I was pretty sure the metallurgical chemistry of adding obsidian to steel would not work in the real world (then again, it is not like I have seen a white walker or snow zombie in quite some time). I thought Chick would chime in but thank you Sixty.

I seen them white walkers. As for snow zombie queen, the less said the better.