The joke is even funnier now that I know the source

Some of the Photoshops appearing in comments are hilarious. These appeared under the item about Obama losing control while campaigning (again! still!) for Hillary, a Trump supporter appeared at their confab and the crowd, apparently a large one, would not shut up and pay attention to Himself.

After ignoring the article and skipping the video, I mean, come on, why bother? Then reading comments compelled me to go back up and watch the video and I'm sort of glad that I did because watching Hisself's frustration was satisfying and fun. Those people will come out to see Himself, but not all that many of them are enthusiastic about voting for Hillary. Not as they realize they're associating with federal crimes. Went like this:

That's pretty much an exact quote.

But the jokes in comments are killing me. 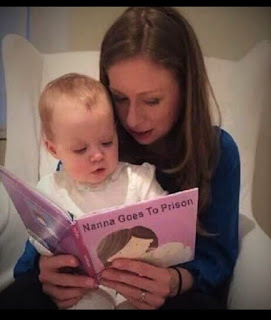 This is the best. I didn't realize until I used Tineye to identify the source and there are several by looking at this site to realize this is Chelsie Clinton with Hillary's two-year old granddaughter. The real title is "I'm a big sister." Apparently Chelsie is preggers again.

I didn't know that and the joke was still hilarious to me.

Incidentally, strictly for your edification, (and where else are you going to get this? Huh? ) in Photoshop there is a tool that will match the text (or anything) to the odd perspective angle of the book. The cover is a trapezoid shape and to match the text must be the same shape as the book cover. Also, the original text is red. To do this choose "transform" under the "edit" tab. Then choose "perspective" and tug inward one of the bottom corners. You'll see the other side tugs for balanced perspective. But this book cover is not balanced. So "distort" allows both sides to tug independently, and that's the tool to match the angle of the sides of the book's cover. Like this:

I added yellow lines in another layer to show the angles of text being matched. It's a small detail and hardly important for conveying the joke, but we're pros around here, and joke details matter to us.

It's a fine joke. And it shows a fine sense of humor even as the rule of law collapses in this country and with the indulgence of an entire political party, and with the collaboration of professor types and professionals, even teachers of constitutional lawyers who all must certainly know better, and all right before our dismayed eyes. This very serious issue is exceedingly divisive. Lines are drawn like I've not ever seen. Right through families, just like the first civil war. 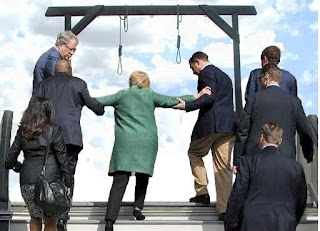 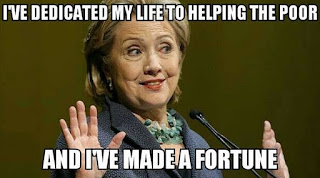 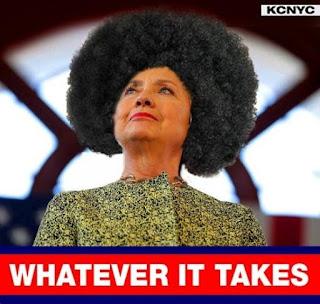 Okay, no one wants to give Chelse credit for anything, but when I read that she objected to some of Podesta's sleazier moves - I can't remember what she objected to but the point is she did object - it indicated to me that perhaps she's not as amoral as Ma and Pa.

ric, she has kids now. And probably a restraining order against Ma and Pa.

PS Pissy thinks Freedom Of Speech means everybody has to listen to him.

A truly great Trump ad is out. Really good stuff.

I hope all this is good luck and focus is not too late.

Apparently not, Frumpty and The Donald (sounds like a sitcom) are tied in MI and PA, if you believe the polls.

He needs to run that ad on tv for a week

It's all stuff he's been saying for 4 months.

Too bad you guys weren't listening.

If he doesn't make ads for mass consumption, the word does not get out. Rallies don't cut it.

Trump could have run ads reminding voters that Hillary steals money from Haiti.
How the ACA is failing. ..her corruption - every angle. Lost opportunities = a tight race in stead of winning outright.

I just now saw that ad run here in Denver. And just as I'm filling out my ballot too.

It's like a full circle moment over here. Or perhaps a full saturation moment, one of those two things.

Nobody cares about Haiti and, until WikiLeaks came out, it was old news.

Once there was proof, then you could make the case.

The Bluebird of Happiness would have had him waste money the way Frumpty has. and, of course, she buys without question the idea the polls are honest. nothing else about the media is, but the polls are - even though they give overwhelmingly to Frumpty.

But, of course, the One True Ted or Little Marco could have won this going away if they'd just done what the Bluebird of Happiness says because Roe told her this would be easy with anybody but The Donald.

The Bluebird talks about mass consumption, but forgets this Internet thingy that means you can tailor your message to the people you want to hear it.

PS Chip, it's probably a good bit of both.

These are good hadn't seen any of them before

'It's all stuff he's been saying for 4 months.

Too bad you guys weren't listening."

I knew his message as well as you, so he doesn't need to get it through to us. The Trump of the last week is nothing like the one before. This was his winning message all along, but he stepped all over it so bad for months that nobody heard it. Imagine if he ran the whole campaign the way he has for the last 2 weeks. This Trump would have been a lot harder to dismiss by so many people. Many more of those early votes would be for him. Trump stopped listening to his own groupies and got some clear-headed advice. Good for him. If he started this even a couple weeks earlier, it would be in the bag instead of a nail biter vulnerable to being cheated out of by dead voters.

" the One True Ted or Little Marco could have won this going away."

PPS FWIW Anonymous says it will release vids of Willie and at least 6 other government officials having sex with minors starting Saturday.

We've heard this before and I'll believe it when I see it.

It's all stuff he's been saying for 4 months.

Too bad you guys weren't listening.

I knew his message as well as you, so he doesn't need to get it through to us. The Trump of the last week is nothing like the one before. This was his winning message all along, but he stepped all over it so bad for months that nobody heard it. Imagine if he ran the whole campaign the way he has for the last 2 weeks.

Baloney. Trump kept the Beast on the run. The media went after him, but any of the Whigs would have folded at the first criticism.

That's the point. He's never given her an inch on anything.

But you guys want it run the way the One True Ted or Little Marco would have done it.

And he would be 20 points down, instead of leading in NH and tied in PA and MI. According to the polls you insist are so honest.

the One True Ted or Little Marco could have won this going away.

You must be joking. Little Marco would be one of "her Republicans" by now.

Trump spent most of his idiotic disorganized undisciplined inarticulate campaign stepping on his dick. His fan-boyz thought it was awesome. Ed the idiot especially.

Little Ed is obsessed with Ted and Marco. I think he has wet dreams at night.

Marco will win handily. If Trump loses Florida, it's over. but weeee - Isn't it fun being tied. We all know that tied = GOP win!

A well organized campaign smashes and hammers from all angles. With Clinton corruption - there are no OLD stories. Haiti was just demolished again by another hurricane. Did the Clinton Foundation lend a hand? Nope. Instead, poor Haiti doesn't want any help from the corrupt clintons. They know that that means. More rape.

Gateway pundit should be re-named. Delusions For U dot com.

Back to the Trump ad Bagoh linked - it's a good ad. Too bad he didn't run ads like that all along.

As a lifelong Pennylvanian, I doubt Trump will win Pennsy. But if he comes within 1% or so, I think that will be a leading indicator that he will win big in FL, NC, CO, OH and IA.

To bad that people who supposedly hate Hillary would have spent more time bashing her instead of Trump.

Trump is just saying the same stuff he has said in speech after speech that I posted. The problem is that the corrupt media would only publicize bogus "sex" issues. Now there is a sex. weiner, occult issue with Hillary and they are flummoxed. Their lies are being exposed.

I have some homeless guys I know who are OCD. I get them out of their Rain Man loops by just changing the subject. It works sometimes. \ There are a few here w/ those inclinations as well. So, I'm making "levity" comments to try and get you all out of your OCD loops.

There is a lot of murders in Chicago. Even the river dies.