The Pains In Baines Showed Vainly On The Plane 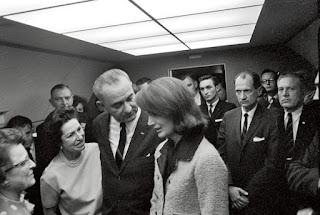 The following is an excerpt from Esquire magazine published a few years back. I was dumbfounded when I read it recently. The context is what happened on-board Air Force One just after President Kennedy was killed -- before take-off and during the flight back.


Jackie Kennedy, who had ridden in the back of the hearse with her husband's body, follows the casket up the steps and heads for the bedroom. She is shocked to find Johnson, Fehmer, and Youngblood inside it—with Johnson, depending on the account, either still on the bed or having just lifted himself off it.

In a 1969 interview with Bob Hardesty, Johnson seemingly confesses to the less graceful of the possibilities: 'He wasn't going to sleep in the bed, and I was trying to talk to [Robert] Kennedy and take pills and locate the judge and do all these things I had to do.'

In less than a minute, all four mortified people in the bedroom leave—Jackie retreats to the aft cabin, next to the casket, while Johnson and his company scurry forward, to the stateroom. Johnson finds Lady Bird and together they return to Jackie, convincing her to go back into the bedroom.

Read the whole thing.
Posted by chickelit at 9:27 PM

Labels: EPR, From the annals of chutzpah, JFK, LBJ

The Kennedys, like the nouveau riche they were, needed no prodding to look down their noses at Johnson.

The irony is, 40 years later, when Willie Whitewater thought he was enough in the Kennedy Mafia to pass a racial slur at Barry, Teddy wasted no time in putting him in his place by leaking the story to the press and probably killing what chance Hillary had at the nomination.

Today, we hear the Klan is supporting Hillary.

Mrs. Kennedy, photographed next to LBJ as he was sworn in, and 3 hours later emerging from Airforce 1 still wearing the same clothes, covered in tissue, bone fragments and dried blood of her late husband, says

"I want them to see what they have done to Jack."