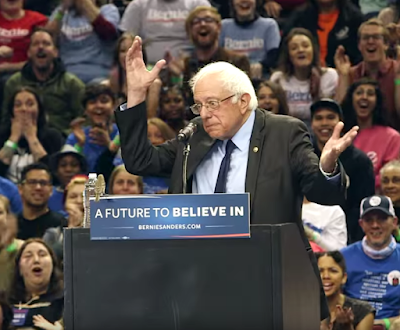 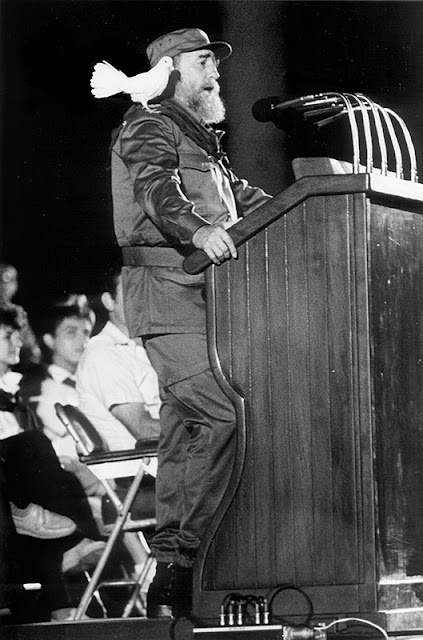 It would have been more interesting if Bernie had screamed and fell over running away because of bird phobia.

The bird was heard to say: "Hmm. Your ideas are intriguing to me and I wish to subscribe to your newsletter."

Bernie seems to be philosophical about these things.

If Bernie were true to his roots that slogan would read, "A Future To Believe In?"

Followed by, "Birds? We got chickens. Lady, look at that yellow skin. The best. THE BEST!"

You saw symbolism in those birds.

You saw the appearance of birds means something even when that something is a joke about them meaning something to awestruck wondering beholders already assembled for something specific and aligned mind-wise.

I had to really look for the bird in Bernie photo. It took a long time. My screen is small. I thought maybe a bird pooped on him, then maybe he looks like a bird. Finally saw it and that reminded me, it had to, the G set birds, and the sounds they represent for the words they represent for the ideas each separate bird represents. And that little brown bird is a very bad sign. It means "bad." But here's the thing; you have to carefully check the shape of its tail. Your only clue to determine if it means the horrible and terrible word "bad" a pointed tail sparrow type its appearance always bad news, or the wonderful and splendid word right next to it and the bird right next to it, same size, same shape, different V cut tail and meaning "great". And both these birds are used a lot so you get a lot of practice with a magnifying glass checking their tails and by having either "great" or "bad" in context. And remembering which is which. G36 or G37. Now, which is it? Knowing is need for how to say it. Look it up!

And the pigeon, taxonomically same thing as dove, isn't one of their birds. But you know, around here and elsewhere, many places, it means peace, you know it means "get killed by a crow the moment it's released from the Pope's window, so there goes that tradition, you know that they're used in weddings and momentous made for media funeral memorials such as Columbine. So it appearing, or flying right back after being released, has no meaning at all. None. Save the meaning it's given by wondering admirers there to behold and all synergistically like minded. Wow, did you see that? Yes, our leader is one with nature. This is a sign. Pfffffft.

Sorry, it's the only emotion available.