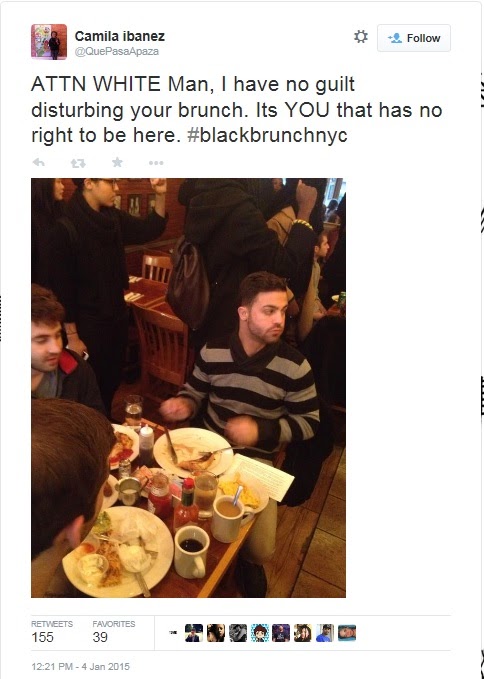 I suspect this racially charged action wont be picked up by the main stream media, other than perhaps Fox News.

Fake racism is all that counts with the mainstream press.
After they get it wrong, the media sweep their false narratives under the rug by blaming others - even though the protests are/were filled with like-minded leftists. Leftists filled with rage and anger inspired by that very sloppy false reporting.

re the tweet: Racism on the rise in the age of Obama.

So this is new?

Seriously youse guys have no idea what it means to run a small business in NYC. You are always a target.

Just as much from De Blasio and the city as these mooks.

Obviously she feels some degree of guilt or else she wouldn't claim that she doesn't.

Conscience is a bitch.

These nudnicks are pissing off their natural allies. If the hipsters are inconvenienced they will stamp their feet and throw their juice boxes.

Slavery must be avenged!!!...or something.

Apparently she never heard how it was the Dutch, not the Africans, that settled New York.

I just hope that these white people who are being bothered while they try and eat, are Obama voters.

Exactly - New York is filled with wealthy white liberals. I wonder if they appreciate this racism directed at them?

They are very likely Obama voters.

These are pussy liberal hipsters that they are bothering.

If they went to any of the pubs or old school restaurants that I frequent for brunch there would be a very different result.

So I think it is great.

No justice no Pâté

Trooper York said...
These nudnicks are pissing off their natural allies. If the hipsters are inconvenienced they will stamp their feet and throw their juice boxes.

Astute point, Troop. But, I suspect that the brunch patrons felt guilty and tweeted & blogged about it afterwards.

I figure I do a screen grab in case the woman decides to delete the... distasteful tweet.

They are basically preaching to the choir.

I'll give those liberal pussies credit - that looks like a fine breakfast.

It always sounds effete to me.

I prefer Linner. or Dunch.

but yeah = brunch is for snobs who over-sleep. ;)

A very late breakfast were drinks are acceptable.

There is a great brunch at the Mossaic, just north of Colorado Springs. Nice drive down there too.

There was one tweet I read just now most telling. Two photos.

First this: a photo of a nervous black Desmond at the lunch counter surrounded by angry looking whites, taken some time in the 50's I think.

I expected the second photo to be of Obama as president.

To this: a photo of a perplexed nonplussed white guy sipping coffee at a counter surrounded by (confused) black-brunchers.

I suggested on twitter people get up and turn their back on the protesters, like the cops did to De Blasio.

There is a great brunch at the Mossaic, just north of Colorado Springs. Nice drive down there too.

There used to be great brunch at a piano bar in Denver. It was in the parterre level of a high rise around Pennsylvania and East 12th. I spent many a night there until bar time only to creep back the next morning/afternoon. I think that's where I "discovered" mimosas.

That photo gives me claustrophobia just looking at it. I hate, HATE, HATE sitting at a dinky-ass table for 2 with every single centimeter crowded with plates, cups, containers, condiments and with a drink teetering at the very edge. It gets on my nerves. And the guy is all, "¿wut? ¿wut happ'n ovah dare?" You have to be completely insensate to sit there and enjoy a meal amidst chaos and near disaster.

12th and Penn. I used to go there too. That's my neighborhood. 11th and Washington, too.

Brunch places all over.

The most popular is Racines and Dillon's. (same owner)

Dillion's is the place I encountered a whole table of some 12 deaf people I know. Upon leaving they were still talking to me through the plate glass window. A bit odd, all that. Snowed the day before. Dr. Fred was getting the car. I was using a walker recovering from a broken femur. I told my deaf friends through the window, "watch the people on the street."

Then acted like I was out of control going down the ramp, "Help! Help! I cannot stop this thing! It's out of control! Help,I can't stoooooooop! Whew." The group walking innocently in the middle of 16th street, a snowed over mall in that area all froze in their tracks. They wanted to rush an intervene and somehow assist, but knew there was no time, plus they'd slip and slide themselves so they just froze in horror and I laughed my ass off. They realized they were being put on and laughed out loud right there in public. The whole place rang with laughter. I looked through the glass and saw the whole table of deaf people in stitches, and there is nothing funnier than deaf people laughing, nothing! it sounds completely out of control, causing bewilderment to other diners inside not knowing what in the world is so funny.

That guy looks white hispanic to me.

Brunch out is for suckers. Bourdain is right.

And I am with Troop, this crap is not tolerated at old school places.

Maybe they recruited some Republicans.

Brunch is great at home!

"A very late breakfast were drinks are acceptable."

Tweet claims they are going to Grand Central tomorrow.

I love breakfast and cocktails, but I want my eggs cooked gently and my cocktails done right. The bacon has to be crisp and tatty.

Which is why I love tail gating.

It always sounds effete to me.

The purpose: to allow time for your hangover to dissipate before you start drinking again.

No justice, no quiche!

Call me dense, but I still don't get how interrupting some guys' meals will help stop a black kid from punching a cop in the face later on.

I'm neutral on the concept of brunch. I think that it's food church for people who don't go to God church, maybe. It's also a let's-finish-this-encounter-in-a-polite-way event for people who took someone home with them Saturday night. And a showoff meal where people can take their steady after a Sunday morning bang.

Plus, it's a coma-inducing meal if it includes one of those massive food buffet arrays.

Anyhow, whatever brunch is, it isn't a place where social justice activism will do any good. The people eating brunch had nothing to do with Eric Whatsisname's death, or Michael Whoeverheis's death. Those guys brought that upon themselves, and brunch can't fix that now. So the protest was useless.

No social activists ever protest in front of known drug houses, notice that? That's because despite all their bluster and shouting and pushiness, protesters are pretty much as risk averse as everyone else. So rather than yelling a the true cause of injustice in far too many neighborhoods, go yell at hipsters eating pancakes and drinking overpriced mimosas made with frozen orange juice and cheap sparkling wine.

Protesters never help the people who actually need help; they just help themselves. They are alike politicians in that regard.

I had brunch at home today: scrambled eggs (Chip's method!) with cheese, except I had no butter and so I used olive oil; crisp bacon I made in the micro with baconator, or whatever this plastic tray thing is -- but it works! And you can save the fat afterward; and, of course, coffee. Plus a fresh pear form Oregon I got for Christmas.

But no drinks. So is this not brunch anymore?

By the way, I miss your cooking posts.

I hope all is well.

That delicious meal you prepared sounds wonderful. but it probably isn't an official "brunch" because you prepared it for yourself. A brunch in the classic sense of the meaning is prepared by others on the diner's behalf.

Plus, I doubt that you have your own tower of molten chocolate in the rectory dining room. The tower is mandatory at all brunches. :-)

Mmmm. Pears from Harry & David. That's breakfast right there.
Do they still individually wrap them in foil? I'm suppressing the urge to hop in the car and drive to Medford right now.

I said this at the OP. They should do this at a Waffle House in the South. They serve brunch 24/7. Two Am would be a good time. If you ain't packing, somebody will loan you one. They want everybody to be equal, and have a fair chance.

Amartel -- they wrapped only one of them! But the pears are still pretty good.