Discovered this by not understanding somebody's comment. Happy Toast left a picture to be remarked upon. Incidental to this, Happy Toast is the person who drew the picture of Batman punching Penguin so hard poop flies out. The cartoon copied and fashioned into a birthday card by someone else and presented to a 6-year old inside a London restaurant that caused the boy to laugh so hard he could not stop, then his sister, then his parents, the whole table, the adjoining tables laughing along without even seeing the card. Today H.T. posted this children's book picture. 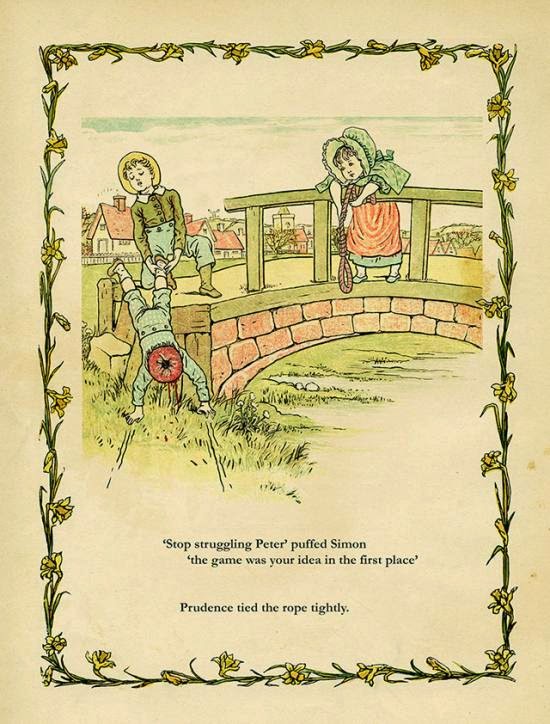 "Stop struggling Peter" puffed Simon
"the game was your idea in the first place."

Among the responses to the picture, this I did not understand:

That Owl Creek Bridge
gets you every time...
(

It is a French film based on an American story by Ambrose Bierce set in the time of the American Civil War.

This is not my cup of tea but I was mesmerized watching the film. Everything about this 27 minute film is outstanding.

The movie in French La Rivière du Hibou, filmed in France, won best prize for best short at Cannes and also Academy Award for Live Action Short but I tried not to hold all that against it. It was picked up for $25,000 for a final episode of The Twilight Zone, considerably less than they paid for their own production.

How did I miss this?

Large chunks of my life have no television at all. I missed a lot. I will not be surprised if everyone saw this already. I see comments all around people enjoy watching this again after so long.


Did you ever ride down a river without a raft, just bang along through the rapids? Even small rapids as found in the Platte when you are actually in it and floating along rather slowly, they hurt like heck when you hit rocks, and you do hit them, no avoiding the rocks, ever,with either your feet forward or hands forward, it's bang bang bang bang bang bang bang until you get past the rocks.

But when we see the lovely woman step forward from the house we realize our dark-eyed sensitive and sympathetic fugitive is landowner, slave owner, and both he and the lovely woman and the life they enjoy suddenly become less deserving of sympathy.
Posted by Chip Ahoy at 1:05 AM

"But when we see the lovely woman step forward from the house we realize our dark-eyed sensitive and sympathetic fugitive is landowner, slave owner, and both he and the lovely woman and the life they enjoy suddenly become less deserving of sympathy."

That's not how I felt when I saw it a long time ago.

Try this Bierce on for size, it's a quick read:

I saw that when it was broadcast. I remembered it as a story about a man wanting to get home. I could relate to that. The rest - meh - who cares?

The season closer. We didn't usually watch "Twilight Zone", but a Phillies game knocked out our usual Friday.

"But when we see the lovely woman step forward from the house we realize our dark-eyed sensitive and sympathetic fugitive is landowner, slave owner, and both he and the lovely woman and the life they enjoy suddenly become less deserving of sympathy."

That's not how I felt when I saw it a long time ago.

Back in '62, it was OK to root for the Johnny Rebs (hey, all the guys on "Rawhide" except Wishbone and Jesus were Confederate veterans)

I don't get that at all.

Very very few people if given the opportunity would pass on building or accepting such a life. He very well could have been victim of simply defending his home or just being on the wrong side with things others want.

I was struck by how sympathetic he made you, despite the likely hood that his execution meant he had done something terrible. You want him to escape and you identify with him, although he very well could be someone who burnt down a school full of children.

It's funny how we knee jerk identify sometimes with the authorities and other times with the lone man out. It's all based on the narrative you have in your head, right or wrong.

Witness the Boston Bombers and how even they have sympathizers.

I didn't know the story, so I had a different impression of his guilt, but

"It is later revealed that after a disguised Union scout enlisted him to attempt to demolish the bridge, he was caught in the act."

But now I understand why he might not want that bridge standing either.

I was struck by how sympathetic he made you, despite the likely hood that his execution meant he had done something terrible.

This is the Civil War, don't forget.

He may have been a spy or a scout (Phil Sheridan, as an example, often used men who could pass for Southerners ahead of his forces; no reason the Rebs didn't do the same), one of Mosby's men (whom Grant hanged with frequency), or a Confederate engineer caught by Sherman's men planting a torpedo (ie, land mine) (Uncle Billy was outraged by the practice).

He could have just been doing his duty.

Is an idyllic life with a beautiful woman in a big house really ever possible? Don't they get all pissy even when they have it all. Maybe his crime was a desperate attempt at escape, and his dream just that - a dream of how he wished it was.

I'm such the romantic.

Slaveholder? I didn't see any slaves.

I liked Owl Creek, both the story and this film.

Ambrose Bierce was a topographic engineer with the Army of the Cumberland - a hair-raisingly dangerous job which involved riding out with a few instruments and a sketchbook between the lines with a couple guys with carbines to keep the enemy skirmishers off you while you eyeballed the enemy positions and drew something useful enough for the generals to make not-entirely-insane tactical decisions, all while exposed to sharpshooters and general mayhem. It explains a lot of his postwar "bitterness", he had a hard war.

Owl Bridge was almost certainly something like what he'd seen in middle Tennessee, and from the context, his protagonist is an un-uniformed guerilla. These folks were regularly hung when caught, by both sides. There's a great scene in E. Porter Alexander's memoirs, during the long retreat from the failed confederate siege of Knoxville in 1864, of a frustrated Longstreet personally hanging a caught East Tennessee Unionist, barking angrily to his staff, "this is how we deal with spies in the Army of Northern Virginia!"