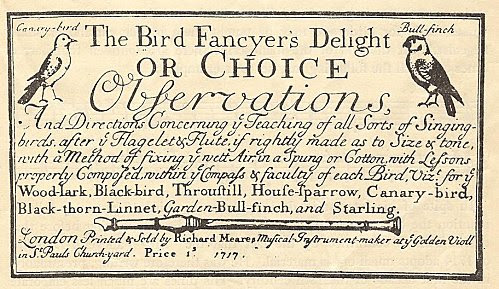 The Bird Fancyer's Delight, a title first used in 1714 by Thomas Ward, is a collection of tunes intended to coax birds to sing music not natural to them, but within their vocal range.

Teaching birds to sing "lessons properly composed within the faculty and compass of each bird," was a popular and lucrative hobby in the eighteenth century. The instruments used were the bird-flageolet and the recorder and other small home-made pipes.

Here is are a few examples of songs played on the recorder by Sarah Angliss. (Play button in top bar.)

Many thanks to MamaM who first introduced me to the subject.
Posted by deborah at 5:46 PM

I notice in the examples are the lark & the linnet. I wouldn't be surprised that it's trained birds that are referenced in the opening of Dryden's Ode on the Death of Mr. Henry Purcell:

Mark how the Lark and Linnet Sing,
With rival Notes
They strain their warbling Throats,
To welcome in the Spring.

It also would explain why, in John Blow's 1694 setting it's scored for two recorders as the obligato instruments.

Mark, mark, how the lark and linnet si-i-ing :)

Thanks, YH, I know that song, but didn't realize those parts were scored for the recorder.

When I was a kid I tried whistling to mockingbirds. They will imitate other birds and even frogs. However, they wouldn't imitate me.

My grand-uncle was Art Coates, an accomplished whistler who appeared on Lawrence Welk and cut an album, Whistling Like The Bids. I have no idea how he got those sounds.

He was also a friend of Harry Truman and his White House visits are listed in the WH records, just before lunch or dinner. He was supposed to have been quite a character.

So cool. How did he do that :) I'm going to send the link to my aunt who likes that song.

My dad once made a fart sound with his lips. A mocking bird in a tree nearby, copied him perfectly.