"Donations Pour In, Funds Launched for Blind Man Who Got Hit by Subway to Keep Dog Who Saved His Life"

"When the news broke that Cecil Williams would not be able to keep his dog Orlando, funds were launched and donations poured in so Williams could keep his life saving pet. Williams, who is blind, fell onto the subway tracks earlier this week and his seeing-eye dog Orlando followed him, waking him up in time for both to duck beneath the train and escape serious injury." 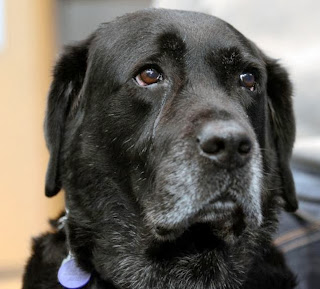 "Orlando is an 11 year old black lab who is set to retire in January of 2014. Williams' insurance will not cover a non-service dog so Williams would be forced to part with his heroic companion. But a man in New Jersey has stepped forward to help Williams. Andrew Piera has volunteered to pay for Orlando's expenses for the rest of the dog's life."

Breitbart, Daily News
Posted by Lem Ozuna from the Braves at 9:12 AM

What happens to retired service dogs? They should be pampered and given rock star treatment.

"Orlando" has been assured a full safe retirement by generous New Yorkers and others, as I posted on the original thread.

What happens to retired service dogs? Well, they can be fostered out to people who enjoy them as seniors, or they can stay with the owner if the owner can handle two dogs and convince the original one that it is "retired"...not so easy to do, but not impossible either. It is an exercise in "redirection". I know a federal attorney who is blind and has kept all of her dogs for their full lives, with the help of her husband. I've seen her husband show up near the plaza with the older dog just to visit her and her new dog at lunch time. Heartwarming to witness, both dogs and the husband who cares that much.

On this subject, I have been thinking about it for myself. "Dera" is 9 now and I know that another heart crushing day will arrive in the foreseeable future. You never foresee it when they're pups. However, in my own seniority it is possible I could adopt retiring seeing eye dogs, or even military dogs, if I could manage the hassles, because I have the background to handle them.

It may be an alternative for me rather than new youngsters. Another is to contact the breeder/trainers I know that produce working police dogs and competition Schutzhund dogs...and ask for a dog of a year or two old that didn't work out as a police dog or a competitor...sadly, many competitors want to walk to the podium with every dog. Doesn't work that way.

There might be a place for me in the lives of some new dogs.

But his insurance will assure him free birth control and a sex change.

There has got to be a huge untapped solution to many of society's problems if we could just move from the legislature centered tax and spend model to one that would allow people to donate much of their money to more causes than just entities set up with the long process of government approved (Democrat approved) charities.

With the internet, this could actually be done. Causes would compete for your money directly rather than through lobbyist talking to politicians. You could keep your money local if you wanted, and it would be pretty hard for government to do things we don't want, which lately seems to be their primary focus. If people wanted to pay for the uninsured, they could.

We could have a mandatory minimum donation instead of just a tax bill.

That's a great idea, Aridog! I hope you do it.

We get dogs all the time that are just not appropriate for families, and we always say that the perfect home would be a strong retired man who would likely get as much out of it as the dog. Any ideas on how to reach such people?

My oldest dog is about 11, a sweet affectionate Pit Bull that I have been fostering for about 5 years. He was in a kennel waiting for his owner to return from Iraq, but the soldier never came back. I'll probably have him the rest of his life. He has everything against him: he's old, he's a Pit, and he has seizures, but he's happy as shit here with us, and he feels like he's loved and belongs here. That gives me a lot of satisfaction.

Bagoh20...I'm pretty sure I will be doing something like what I described. I am also considering adopting pit bull type dog(s) from the shelter I am a member of the support group thereof. It is a no kill shelter for bullies of all type...they call them luv-a-bulls. Truth is that I am addicted to the German Shepherd traits and love them dearly. Likely I will try to stay with them, but in truth, I need dogs for companions, far more than protection, so anything is possible. Take me away from all dogs or horses and I am no one.

Any ideas on how to reach such people?

Never thought about it, but I will now. Old retired cops, soldiers, and even competitors if they aren't hung up on still being competitive. Hell, I am two of that three.

I'm forced to think about it for myself, because I owe to my/our next dog(s) to be fair.

"Dera" was a competition dog, potential police candidate that turned out to be way to defensive and wolfish...her blood line includes world champion level police dogs, protection, and tracking dogs. "Dera" is just more wolf than dog in her spookiness, but with the trait all "Omegas" have...that is to never give up, never quit, always play.

"Ari" was a very large dog, powerful and distinctly other dog aggressive...a flaw I suppose, but such a dedicated protector, even of "his" cat "NitWit", that I didn't care and kept him leashed around other dogs. When his companion (and step mom) "Zoya" passed away I wanted another dog for a companion, but was told it just couldn't happen. Then I found "Dera" who had been set aside at 8 months of age because of her wolfishness. Perfect. Everyone said I was nuts. But I knew that the Omega never gives up and that was Dera in a pack setting. So I bought her for a princely sum and Judi and I began the conditioning of she and Ari...9 days of nerve shattering muzzled tension.

Then...play erupted. Muzzles came off and they were joined forever until Ari passed away. Dera's breeder said he never dreamed it would work and expected to get her back. I just said that Dera doesn't
quit and neither do Judi & I. One caution...you
'd better know exactly what you are doing as you try what we did...understanding dog behavior and signals is paramount. Oh, and you will get bit now and then by powerful dogs...it is usually your fault.

Great work, Aridog. I've been through that kind of thing a few times. When people see a dog act seriously aggressive, they never forget it, and it's hard for us accept that this dog can be playful and friendly once they are no longer insecure or feel threatened. Often it's just immaturity or confusion because they just don't know how to act. They have not learned cooperation and tolerance yet, but they usually can. This is kind of my function with our rescue. I socialize those dogs with my pack and lots of exercise and interaction. It's the most rewarding thing to find a dog that scares everyone, relax them, and teach them, and then later get photos from their new family with them sleeping on the bed with the cat and the kids in perfect harmony, and hear how much they love and enjoy them. They rarely return to their old ways. Thanks for what you do. I know it's not easy.

Yea, Kickstarter is great, but I still have to pay taxes on the money I donate to them. When I get a tax deduction, that expenditure is essentially 50% off. A huge incentive to give more.

Yes it is...here's one campaign using Kickstarter by the daughter of a friend of ours. And yeah, Judi and I have contributed. When I was a small child (during WWII) we didn't have toys per se...just pieces of wood or blocks to work our imaginations around...so yep, I am intrigued by this idea.

As EMD say, echoing Bagoh20...It is voluntary. What a concept, eh?

Bagoh20's point about a tax deduciton is well founded. Crowd Funding does not give you equity, just an opportunity to support something. I get a deduction for what I give to charities, so why not for crowd funding that may create jobs in the future? Sounds like a charitable purpose to me.

A great and noble dog.