He is eighty-five years old. It matters. They pulled him off the plane as he was departing from a 10 day visit. His traveling companion was able to stay. Nice people those North Koreans, we're nearly able to match the utter banality of that same mechanistic absence of humanity and propensity for digging into peoples' deeply personal affairs.


the war veteran allegedly attempted to meet with any surviving soldiers he had trained during the Korean War to fight North Korea, and that he admitted to killing civilians and brought an e-book criticizing North Korea. And for these and other reasons he deeply regrets the deplorable interiors and tables in North Korea being so unhelpfully short. 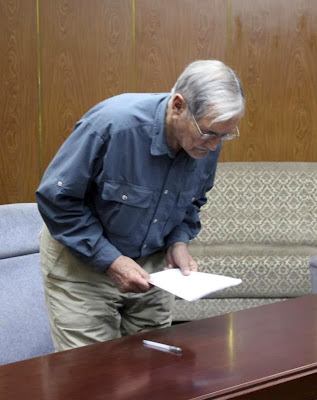 I changed part of that. It's his own fault for going there etc.

I am trying to put myself in his shoes. Fresh socks, of course, but trying out the whole thing, pick up the whole load of baggages, the war memories and such, a full life lived very well and now traveling, seeing perhaps how things have changed, struggle to match up things as they were, get a sense of it all, feel it, man, really feel it, and I try to feel or roughly calculate how many years it will take for me to reach the point that this man reached where I just flat don't give a shit what happens, I'm going to North Korea and looking up old chums.

Merrill! Merrill! *excited and anxious* Buddy, how are you? Are you doing okay?

Merrill lifts his head wearily, "Eh, I make a living."
Posted by Chip Ahoy at 3:02 AM

The linked article is chilling. How did the US Customs agency get the private medical records of a Canadian citizen? NSA? It must be pretty easy to tap into records in Canada's national health system.

Good luck with any real privacy under ObamaCare, America.

We won't let a depressed Canadian enter the US, but any jihadi or cartel member is welcome to cross the southern border. Makes you hate the gummint, doesn't it!

Her problem is that she's not Muslim. If she was, whoosh, right through customs.

"...he deeply regrets the deplorable interiors and tables in North Korea being so unhelpfully short. "

An inspired caption for sure. Cracked me up.

Crazy old fool. Sentimentality is a killer. Tying up the loose ends of a life, an old man's head softens and he goes questing in a dead land ruled by a beady-eyed degenerate Fisher King. Did he think he was going to heal the boy-king, guardian of the Communist Grail? Maybe it was a return to the 50's and nostalgia for the show trials nations in barbaric mode love so much.