Insert Your Own Punch Line 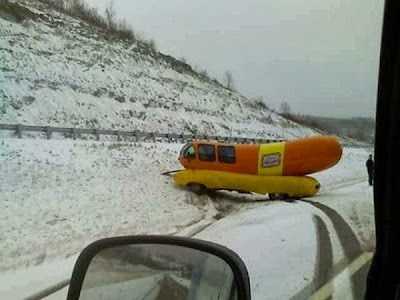 This calls for Trooper's words of wisdom.

Be careful with your wiener when it's slippery out.

Neither Rain, Nor Sleet, Nor gloom of night...

That Insta-post has 18 comments thus far... and yet it only has one tweet. That says something about something... our blogs and our tweets separate and never the two shall meet?

Even I have my shock values. I think once veins enter the picture, at that much enlargement. Yeah, that would qualify.

R&B: That photo was inside a main stream rock album in the early 1970's.

John Kay pretty much rode "Steppenwolf" into the ground, playing to smaller and smaller audiences until 2007. It's almost like he should have quit in after 1975, done something else for a few decades and then massively cashed in like "Black Sabbath" tried to do.

Just pissing his name in the snow, what dude hasn't done that?

Weiner in front of skid marks, describes the scene and the driver's underwear.

Oh the Huma-tity! Or Huma titties!