Of course, we know that sculptors had muses: 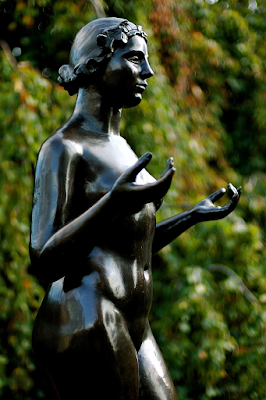 Late in his life Aristide Maillol met his last muse and made many sculptures using her as his model. This is one of "Three Nymphs" which can be seen at the Hirshhorn museum in D.C.
Rodin's muse was the gifted sculptor Camille Claudel, who also worked with him on such pieces as "The Burghers of Calais". I can't find a good picture of the marble bust he carved of her, but what a bust it is, if you get my drift...
Gaston Lachaise met his muse on a steamship while crossing the Atlantic. You can look up his work, I am not posting any of it here. Suffice it to say I got kicked out of a sculpture studio for imitating his sculptural style, so we'll just leave well enough alone.
In dance, choreographer and dancer Bob Fosse met his muse, collaborator and wife, Gwen Verdon, and they performed many memorable numbers:
This is "Who's Got The Pain" from the aptly, and need I note, reduntantly named "Damn Yankees". Bob has a great vertical but Gwen holds her own in this number - she is hot! And a redhead, but those of you with color vision know that.
Let me add, I have seen this movie a couple of times and I still don't have any idea what this number is about, what it signifies, why it is in there, but that doesn't matter. All that matters is Gwen Verdon. And the choreography is pure Fosse.
Okay, one more - I was just wandering around the internet and found this one - once again, I have no context, no idea what it is, but the woman in the "Aloof" moves in a way that I find beguiling. I was around in the 1960s and I never saw anything like this, but then again, we were country.
This is what we were doing during those years:
Watch for my cameo at 3:15.
Added: 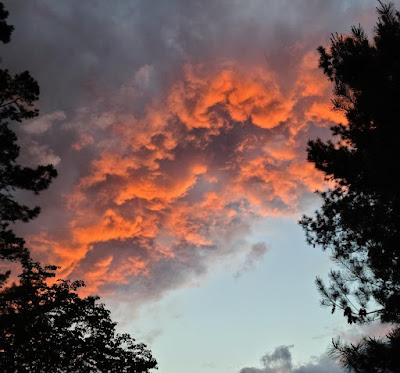 I photographed tonight's sunset while I was out running laps.
Posted by Sixty Grit at 9:32 PM

I wonder what that sounds like when it's played on a Terpsichore.

In this day and age a racist dog whistle of course.

The second clip is "Sweet Charity", a musical based on Fellini's "Nights of Cabiria" Gwen Verdon did the Broadway show.

In Damn Yankees she does another number in a nightclub where she really lets loose. It's always good to see a great dancer perform.

I wasn't sure I had seen "Nights of Cabiria" but as I read the Wiki entry it seemed very familiar to me. I know I have seen "La Strada", that one is indelible, and it has the same actress in it, plus Anthony Quinn and Richard Basehart, and it is one of those movies you only need to see once.

I think the dancing in "Sweet Charity" is better, too.

What you wrote about "Who's Got The Pain" and Verdon was like reading my own thoughts. Luckily you didn't say any more, or you would have a filthy mouth.

LOL - thanks, baoh2O, I appreciate that.

And I think I get your drift. To summarize, Gwen - damn, girl!

Different Strokes! I was impressed with seeing the white shoes in sync, and the way the bare ankles on one and bare midriff on the other worked as different and same. And the underbelly of the sunset. And the glimpse of SixtyG as SnappyT. Fun post.

Thanks, MamaM. And you described that sunset exactly right - it was darned near overhead when I was taking its picture.

Gaston loved his muse and, I assume, she loved him back. She left her husband and took up with Gasty and they lived happily ever after. My imitation of his works was not nearly as shocking as some of his originals, but nonetheless, it was enough to get me barred from the studio. Come to think of it, I don't think I have finished any sculptures in clay since then. Well, huh.

The actress in "Nights of Cabiria" is Giulietta Masina, Fellini's wife and probable muse. She played in four movies he directed and a few he wrote. The most personal one was Juliet of the Spirits.