Back in 1961 I watched an episode of "The Twilight Zone" entitled "A Penny for Your Thoughts". In that epi some schmoe played by Trooper's favorite Darrin Stephens, Dick York, tosses a quarter into the money box, it lands on edge and sticks there. This one-in-a-million shot allows Dick's character, named Hector Poole, to read the thoughts of those around him. Great gift, eh? Anyway, you all know that episode backwards and forwards, so it is just here to kick off this round of Hector-ing.

We all remember the original Hector (Ἕκτωρ) from "The Illiad", wherein it is claimed that he killed 31,000 Greek fighters and who was in turn, killed by Achilles, the heel!

Lousy painting with good horses. Peeps in those days were known to get stabby. Take that, Hec!

Back when I used to make round objects I purchased a book entitled "Ceramics" by Ettore Sottsass. I bought it because the book is filled with large photos of the work Sottsass did in clay - very colorful, very geometric, and I must say, very different. Open the book to any page and you will see things the likes of which you might not have seen before. 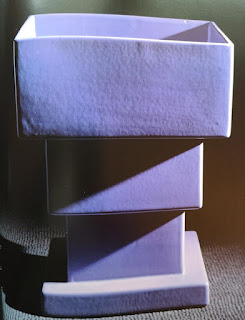 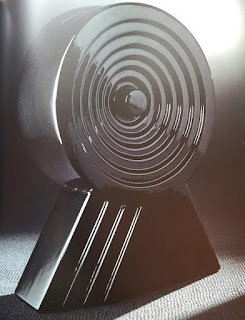 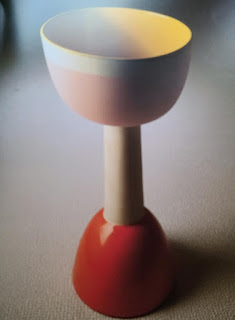 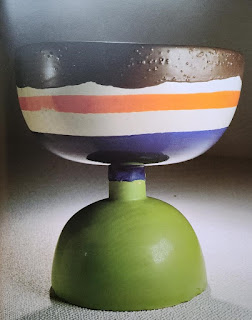 First, my apologies for the lousy photographs - I looked online but can't find good ones. He also worked in glass, and there are some nice pictures of his glass work available. I read his Wiki page and I have no idea what language that started out in, but it ended up in gibberish. It is a very confusing mess.

It turns out that Sottsass worked in design for much of his 90 year-long life. He fought in WWII, was in a prison camp, saw things that most of us never want to see, and some how came out the other side able to work and be creatively productive for decades. He was very innovative and the objects pictured here are such a tiny portion of his output as to almost be insignificant.

The book I have also has some of his writing. He was a very quirky writer. Once again, what is presented is actually the writing of the translator, but unlike the Wiki page, there is a true sense of Sottsass consistent through all of the chapters. He was a character, and in some regards, I wish I could emulate his nonchalant nihilism, but I wouldn't want to go through a war to obtain that attitude. He had a great knowledge of the history of ceramics and the role he played in that history. Great perspective on how things come and go, how they change, and pass from this world. I recommend his essays if you can find them.

He was part of many design groups and movements, probably most famously, Memphis. You may remember such works as: 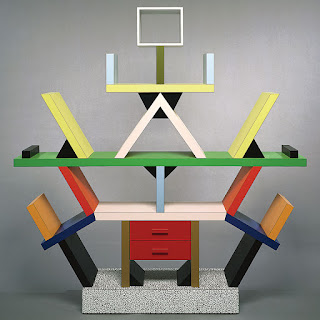 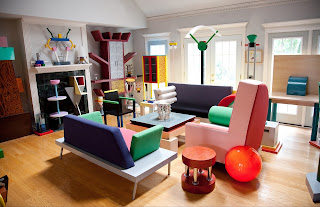 I remember that work as I was studying furniture design when they hit the world. That work is so different from what preceded it as to be revolutionary. It certainly speaks to its time, and while it seems to have faded, its influence is still rattling around out there.
So what the heck does this have to do with the Trojan War? Ettore is the Italian version of the name Hector. How about that!

The group was named after this song.

I have posted this many times, but think of it as ear bleach.

One more thing - during the time I lived in the vicinity I learned that the name of the city is pronounced "Me-uh-fus". It's easier that way.

Joe Green, just because he is Italian.

Labels: Ettore Sottsass, I was told there would be no Dylan, King Curtis, Memphis

Fun stuff, but I can't imagine living with it.

I hear ya. In fact, furniture that loud needs a volume knob.

I always liked the colorfulness of his work, but bear in mind, I am colorblind.

A bunch of that furniture looks like it's Tinkertoy inspired.

Made me go out and look to see if you can still buy Tinkertoys, and ... you can! Don't know how they've managed to not be sued out of existence as a choking hazard, but good on them.

I have a vague memory of watching an episode of “The Twilight Zone@ with my mom in the early 1960’s. Must been ‘63 or ‘64. Must have been a special even too because the show wasn’t on during the day or evening, was it? The episode was the one about the astronauts who land on or near a house owned by Agnes Moorhead. Everything looks normal until the two worlds collide and the viewer sees that the men are tiny and the Agnes is a giant.
Rid Serling and his crew of writers were absolute geniuses

It's fun to say ..Sottsass

I just watched that episode, CL, and it was originally broadcast a week before the one with Hector back in 1961, so I assume you watched a rerun. Agnes swings a mean hatchet, that's all I can say. Her role is essentially silent, only pantomiming her feelings and reactions to the space invaders. The twist, of course, is right at the end. And ol' Rod, working on his upcoming heart attack as always, is burning a lung stabber while doing his intro. Those were the days, eh?

I agree, CoCfH - it is fun to say, until you try to tell others about him and you are misunderstood. That can get awkward.

As for choking hazards - I gathered up a big ol' mess of old toys and sent them to my son for my grandchildren to play with and I cautioned him about the Micro Machines, which were tiny cars - in this case BTTF Deloreans and Citroens, and his response was "Well, if they are stupid enough to put them in their mouths then that's on them!" I think he was kidding. I think...

Speaking of Rod Serling, remember when I used to record and post Chirbits?
I started doing these just around the time that Althouse had that meltdown which spawned Lem's. Often, I would just voice someone else's comment in a voice which I thought matched the mood. Other times's I'd script them myself -- like this one which was a nod to surreal world of Trooper York's blog: link. You have to click the play button to hear it. Lemme know if it works after all these years.

Good one, but if youse remembahs his TV show you would know he's got da Brooklyn accent.

I never realized that Serling spoke Brooklynese; it's masked beneath that otherwise clenched diction.

Trooper York's Big Top drew in far more Sirs interested in enhanced mamms than it did Ma'ams who supported the real deal!

As for the artist and furnishings here, I was unfamiliar with both before this post. Even the red Olivetti Valentine which I'd have remembered if seen must have been outside my view at the time.

So what you're say is that I should project Trooper's real voice with the clenched diction for a more authentic Serling voice.

MamaM said...Trooper York's Big Top drew in far more Sirs interested in enhanced mamms than it did Ma'ams who supported the real deal!

A Rod/Trooper mashup - I have no idea how that would sound. It is a dimension as vast as space and as timeless as infinity. It is the middle ground between light and shadow, between science and superstition, and it lies between the pit of man's fears and the summit of his knowledge. This is the dimension of imagination. It is an area which we call The Twilight Zone.

I saw a bit where Rich Little mimicked Vincent Price - it sounded like a mashup of Tallulah Bankhead and Paul Lynd. Very odd, but when you isolate Vincent's voice there is kind of a hint of the mint in there...

Speaking of Paul Lynde, I once voiced Titus as Lynde. link

The script was for real from Titus. I couldn't make that shit up.

That boy ain't right. I better just leave it at that.

Is that your voice- chick? Do you use a computer to make yourself sound different - or are you a natural at shape-shifting your voice?