I haven't been posting flower pictures this year as they would be identical to last year - daffodils, paperwhite narcissus, the usual. But here are a couple, just because: 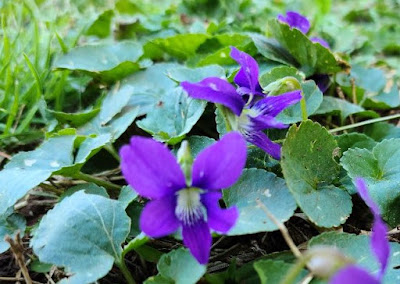 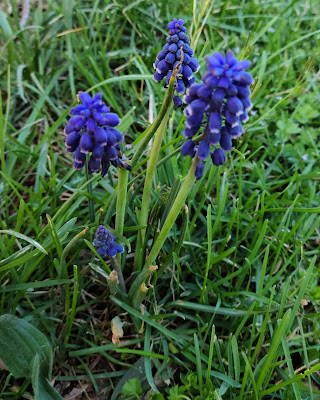 As I say, nothing new - violets, grape hyacinths, the usual suspects. 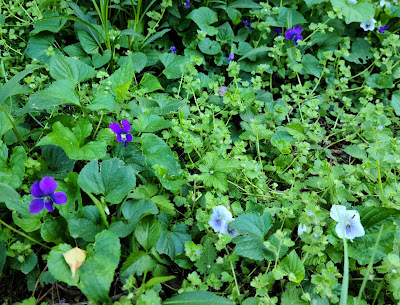 A friend suggested these are dog heath violets, I know not.
But on to the real subject. I got a call out of the blue last night from my cousin. She and her husband were touring our family homeland in Kentucky. She wanted to know what I knew, specifically about the birth and death dates of our great-grandfather, as she was going to visit the Baptist church in the town and wanted to find his gravesite. I told her, she was able to find it and sent me a picture. He must have been successful as the grave marker is impressive. I won't post a picture as our actual family name is not "Grit" - shocking, I know, right? Anyway, she also found a big ol' mess of gravestones in the same cemetery with our name on them - must have been 30 or 40 of them. I had never seen such a thing. Probably the only way you could get that many of us together in one place without a big fight breakin' out.
We talked for an hour or so, there were many stories I had never told her about the summer of '67 that I spent working for her father in Greenwood. He died the next year, she was quite young and I was able to fill in some of the blanks about the shop and the business and other family history. I also told her about the time I unloaded a boxcar full of bags of cement in the hot Mississippi sun, that made her chuckle.
Then, I got to thinking about it - heck, if I could pick up and carry nearly 300 pounds of cement when I was 17 years old, what's stopping me from such mighty endeavors today? Why nothing, that's what. So that thought, combined with me watching the archeology show (does this kippa make my head look dusty?) got me to thinking about a project I have been working on, once in a while, right here in my yard.
Ten years ago I started building a mound, as that's part of the Mississippian culture - mound building. I had stopped adding to it because all the dirt I was buying had organic material in it and even though I built the mound quite tall it shrank as the organic parts rotted. But this year I started burying old pottery I had made in the mound - because every self-respecting mound has to have treasures buried in it.
Then I started getting more dirt and piling that on top. Last night I decided to haul an old cement planter full of dirt up on to the top of it. So today I did: 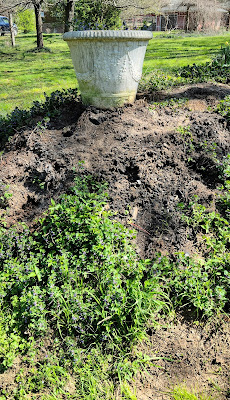 It only weighs a couple hundred pounds so it wasn't that big a deal, now I am inspired to haul more rocks up the hill. I think I will make it my own personal observatory for sunsets. If I have learned anything from archeology, and it's not clear that I have, it is as follows:
People can move great weights,
Stones and piles of dirt last a long time,
Pottery allows people in the future to date the entire heap.
So there you have it - my contribution to future mysteries.
Funky Tut!
Posted by Sixty Grit at 7:43 PM

Scatter some coins in the mound, Sixty. Pennies will do -- just something to get the poor postgrads of the future excited for a second.

By the way (if I may stomp on your post), Chip Ahoy says on his blog--first post in two weeks--that he's in intensive care, due for heart surgery tomorrow. I wish him luck.

Hard news regarding Chip Ahoy's hospitalization and upcoming surgery. Intensive care is a serious place to land. I too wish him luck and hope all goes well, with recovery, healing and more life realized.

Appreciating the flars, Sixty. The forsythia branches I clipped and brought into the house to force on Easter, opened today (indoors). And the daffodils are finally on their way up. Meanwhile Michigan takes the cake on having the most Covid cases this week, with one of the most restrictive lockdowns still partially in effect.

Maybe you could add a sealed plastic bag of masks to the mound if you can find someone willing to contribute a used one. To open it or not would be the question if found.

Grit news is good news even if it isn't on a tombstone. My grandpa used to get the Grit weekly in the 1950's, probably his only extravagance and one I enjoyed going through.

Anyhow, 300 lbs of cement? Criminy! I remember wrestling the occasional 100 lb feed bag as a teen and thinking a 50 lb bag was lightweight. A couple days ago I got a 40 lb bag for the back yard critters and went looking for a shopping cart so I wouldn't have to carry it too far. As one human forklift to another glad to see you can still do it!

I have been burying metal in the mound. I hint to friends and family that the mound is where I bury my Krugerrands - and with enough nails, washers and copper kettles buried in there anyone who runs a metal detector over the hill will get lots of hits. But I fooled 'em. No Krugerrands will be found there.