I ran out of paper towels the other day

I thought I had some on hand, but when I checked, it turns out that instead of having any paper towels all I had 5,000 rolls of toilet paper. I used a roll of that instead, but today, knowing that we were going to have tornadoes all day I figured I would go to the store early and stock up on paper towels, just in case.

Since I was already out I stopped by my favorite hardware store. Talked to the owner about one thing and another, and noticed that the shelves of his store had been picked clean, as if vultures had been there, making sure not a scrap of anything was left.

Turns out that the $1,400 stimulus checks were getting spent left and right. Willy-nilly, even. I heard stories of people buying things they hadn't even planned on - maybe they stopped by for a Glock but they left with a Glock and an AR and who knows what all. I don't need or want any of that kind of hardware, I am looking for a .22 revolver. A tiny firearm. A so-called mouse gun, not that I would shoot a mouse - no, I prefer to catch them and set them free. But the store didn't have what I was looking for. They did have a Saturday Night Special, I am sure you all remember those - a cheap-ass .22 used by cheap-ass low-lifes in the commission of their low-lifery behaviors. Sumbitch I saw today looked like it would blow up in your hand. So, no, not for me, I can wait. Sitting next to that was a .357 Maximum, yes, that's right, a Maximum, not a magnum. Never even heard of one of those. It was a hulking piece of hardware that is not only too bulky to carry, these days no manufacturer even makes ammo for it. Well, that's not practical, unless you want to carry a club with you at all times. There was also a long barreled .38 police special from back in the pre-semiautomatic days - you see those in all the police shows made prior to the '80s. Nice, but once again, more of an antique at this point. Before switching subjects, I will say that both the .357 Maximum and the .38 long barrel were known for their accuracy at distances greater than needed for most pleece/thugee interactions.

Back in the '90s I studied sculpture under the teacher (not literally, thank goodness) Martine Vaugel, who had trained at the Ecole de Beaux-Arts in Paris. She learned and taught us the same methods used by Rodin and Jean-Baptiste Carpeaux, two of my favorite sculptors. She moved to Durham to attend the Rice Diet scam program, and I say scam as no one I knew who went there ever lost weight, except in their wallet, but that's another story. While she was there she set up a school and taught anyone who was willing to learn. I was thankful to be able to learn that way of sculpting locally. It was awesome.

She would hire local models and we would do portrait busts or figure studies, and there was this one creepy guy she used, he lived in the back of the studio, was peculiar as all get out, but he had an unusual face, so there you go. I did this bust of him: 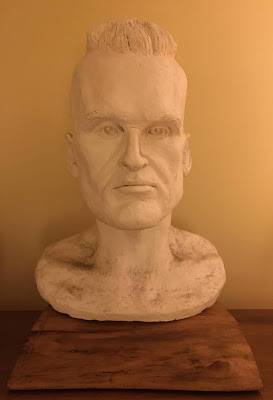 That has just been sitting in my attic for 10 years so I loaned it to my friends who live down on the coast. The guy did this with it:

That is the first thing I saw on my computer this morning and it made me laugh.

Anyway, even after 12 hours of level 4 tornado alert which changed to storm warnings then to a watch, we ended up getting an intense thunderstorm that lasted a half hour or so. I am not complaining, and I am thankful that we now get advance warning on potentially severe weather. But after all that I was able to go running tonight under moonlight and that was very nice. Better that than tornadoes.

Take a selfie, pick a song, and let WOMBO work its magic."

O brave new world, that has such apps in it.

You are a true Renaissance man.

I switched to kleenex from paper towels years ago, for hand drying. You do have to use a lot of them for serious spills on the carpet though.

My stimulus check gets returned to the government next month.

According to a source in the farm store industry, replenishment is becoming a big problem. It's at 60% right now, meaning the stores are only able to obtain and restock 60% of the items they've been selling. And odd gaps are starting to show up like problems getting cans of spray paint due to the current shortage of rolled steel used to make the cans.

It's my sense we're going to see more imbalance happening, with a growing public awareness of something is seriously off, leading to more panic buying and hoarding as a result. Right now, sales of home improvement and self-reliance items are going gangbusters, beyond projection with not enough stock coming back in to expand business or open new stores.

After last years shortages I have been trying to predict what will disappear from the shelves this year. Ammo is long gone, I am still able to buy canned goods, never thought to buy spray paint, but who knows - I might have to tag my neighborhood to alert the rival gangs to whose turf they are on, but for the most part I am still getting rid of stuff. Perhaps I need to reconsider...

More on the spray paint-- the coating that goes on the inside the cans for paint and canned food is also in short supply.

Right now spring optimism is building and those who opened the doors to let in the current administration think they made it through the earthquake of the pandemic with secure foundations and no tsunami on the way.

Change for better and worse is here and coming.