Back when I was  a bowl turner I was always on the lookout for unusual local trees to make bowls out of. One day a woman asked if I wanted a deodar cedar log. Why I most certainly did.

Cedrus deodara is a tree that is native to the Himalayas, and it has been planted all over the world as an ornamental tree. The one I got grew in a nearby town and it was, as its name implies, a true cedar and quite aromatic to work with. Around these parts any aromatic wood is called "cedar", such as Juniperus Virginiana, AKA red cedar, which, as you can see by its binomial name, is actually a juniper. Another one I have managed to get my hands one, and this one is nearly extinct around here, Chamaecyparis thyoides, It is known as white cedar, but it is actually a species of Cupressaceae, a cypress. Some call it Atlantic white cedar, and there were a few times I was lucky enough to have finished examples of all three "cedars" for sale at the same time. An aromatic riot, I tells ya.

Anyway, I got off on this tangent due to seeing the word "Deodar" in the list of Sanskrit words that made it into English. "Deodar - through Hindi देओदार deodār ultimately from Sanskrit देवदारु devadāru, a kind of tree. Devadaru - tree of the gods - you can't go wrong that that shit, just sayin'. 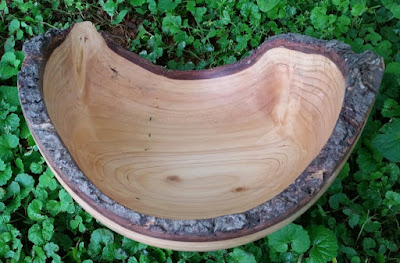 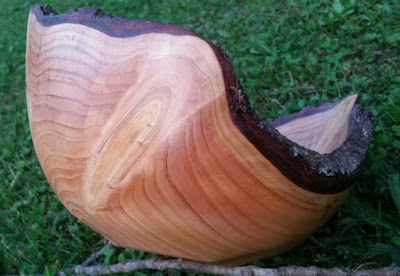 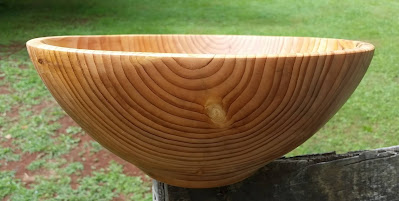 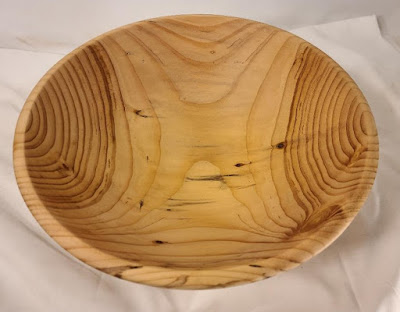 That is what the finished deodar cedar bowls looked like. Their aroma fades much faster than our local red cedar, and the aroma and working qualities are quite different, but it was fun to work with.
Boccherini.
Posted by Sixty Grit at 8:00 AM

Does stratch and sniff work for cedar? Do the scents remain buried inside? I think we've had this discussion of aromatic trees before: link. No wait, that was at my blog. And look who showed up in the comments.
While you're there, check out some of the new photos I put up there recently.

How does "Ferrin" fit here". I recognize that word as iron-bearing. Am I off track?

And what a lovely piece of music! Thanks for that too.

You know, words used by ferners! From ferrin lands. You ain't from aroun' hyeah, is you?

And yes, there is usually some residual trace of the aromatics in the wood, but they grow weaker over time. Sanding (SiO2) the surface tends to renew the scent for a while.

As for the Boccherini, I have posted that here a number of times because I like it so much. My favorite recording of it was one I heard on the radio - Von Karajan conducting the Berlin philharmonic and I can't find that version on YouTube. It is much more percussive and brighter sounding, which works well with the nature and subject of that music. There is a strong Spanish element in his writing and that contrasts nicely with his Eyetie roots.

And how about that douche Ritmo - he sounds somewhat non-crazy in those responses. He sure went off the rails later on. If he is summoned, so be it, I will delete his idiocy once I see it.

But back to your blog - those are some excellent pictures you posted there. The moonset is especially nice. I was out running as the moon rose through the clouds the other night and by the time I got inside and got my phone the effect was gone. You have to act quickly to get a good moon shot.

Yes, I waited out that moon shot. And I was inspired by a local moon goddess.

If you had written Furrin words I would have stayed on scent. "Ferrin" set off a 3 alarm chemical trigger. Ferritin, etc.

Bobby agrees. Also, it was late. I was not going for irony.

Sixty, did you ever go to Lago di Nemi when you were touring Italy?

Gorgeous bowl(s). Are the first photos early versions of the finished product in the final photos? Do you see the end product before you start or does it develop as you are working?

I did not, CL, I have only been to Rome and Florence. Twice. Missed Venice, Milan, Pisa, and all the rest. There is a lot to see there, and even in the two cities I visited, I missed tons of stuff. I really should have gone to Milan to visit La Scala and see an opera - as much as I love opera that is the place to go. Oh well, so it goes.

As for the bowls, Amartel, that is two pictures each of two different bowls - the top one has a live or natural edge, the bottom one is the more traditional turned lip. They both sold, and I think I have one more blank for making another live edge deodar cedar bowl - I like that look and it harkens back to the work pioneered by George Nakashima, a woodworking legend.

Well, I've been writing about a place called Devil's Lake in Wisconsin. It was one of my dad's favorite places to dive and I have a lot of wonderful and very early memories of the place. It's place with pre-Columbian history too and was sacred to the Ho-Chunk (Winnebago) Tribe. I knew some of that. This reminded me of Lago di Nemi which was also sacred to the Romans.

We would have an annual camping trip @ Devil's Lake w/ several families. My fam would sleep in a tent. I would sleep in my van or go to a funky motel in Baraboo. Beautiful lake and campgrounds.

Nick don't do camping? I love camping. We used to go to Pamolar State Park in northeast San Diego County. We nicknamed it "Mountainside" to rhyme with Oceanside and Riverside. We came -><- close to buying property up there to build on. Good thing we'd didn't because wildfire around 2012 would have wiped us out.