I am watching too much television. I just watched all three seasons of ST:TOS. I enjoyed it. As the saying goes, back when it was first broadcast all we had was a B&W tv so we never knew who was going to die. The colors in the remastered versions are great. Sure, there are a couple of weak epis, but I still have some favorites, such as "City on the Edge of Forever", which reminds me of a Joan Collins joke, but this is neither the time nor place.

Smooth segue into another story - I had a Panasonic vacuum cleaner. It broke. I fixed it. It broke again and I was unable to repair it. I bought another Panasonic. It lasted five years, then it broke. Repeatedly. Then I saw an ad for a used Bissell. I contacted the seller and today I drove out into the country to purchase it. For $25 it needn't last long to be a better deal than the last two.

Along the way I saw the fields greening up - alfalfa, I suppose, saw dozens, and that's not an exaggeration, of old log cabin tobacco drying barns. Some were returning to the earth, others are being maintained or even restored. Many were made in the 19th century out of heart pine, which is the heart wood of the long leaf pine tree which is nearly extinct. Tobacco is now an extinct crop around here. I also saw houses along the way, some for sale, some were very nice, but most were too close to the road to suit me.

Which leads me to my next segue - I started watching a horrible, trite, no good, poorly written, cliche-ridden crime procedural, no need to mention the name - that would describe 99% of that sort of show, and thanks to CL I know what to call my ability (affliction, bad habit?) to notice tree species and especially when said species are out of place. The crime fighters are called to the scene of some horrible terrible crime in Baltimore. Yes, the Baltimore in Maryland. The city I have been visiting since 1955. Our intrepid FBI (speaking of a bad joke) agents drive right past a number of palm trees on their way to the house, which is obviously in L.A. Nice. I can't be the only person to notice the fact of how out of place that tropical plant is in alleged Bawmer. It is just so wrong.

Because I needed to watch a cheerful show I watched "Cool Hand Luke" again. I liked it more this time than last, and while there is no need to discuss the plot problems or the memorable quotes, rather, based on the title of this post, I will focus on the trees. First thing I noticed was that the ones around the camp looked like eucalyptus trees. I would swear they were eucs. But they all had Spanish moss hanging on them, which kind of breaks up the profile changes the shape of the crown, and damnit, Spanish moss is the real deal. You shouldn't see that on a euc.

Once again, Hollywood magic got me - it was filmed in the San Joaquin valley, the trees were all California trees, and the moss was brought in and hung on the indigenous trees just to fool me. How about that! It worked, up to a point. And just so we are clear, those eucalypts are not native to CA, but that's a story for another day.

I laid out a new track in my backyard, slightly longer than the old one, and tonight I ran 10 laps with my RunKeeper going, and it turns out my new track is .075 miles long, which is helpful for calculating how far I run.

I also went for a walk today, the cherry trees are blooming: 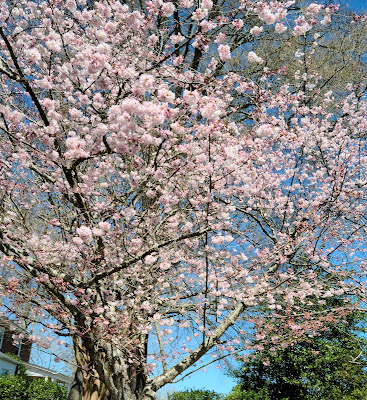 And, because this post has dragged on and on, time for a bit of levity:

Wombo to the rescue.

Labels: cherry blossoms, Nothing can be a cool hand Luke, running laps, shakin' it here boss, ST:TOS, what we have is

Yes, that and boiled eggs, spinelli.

ST:TOS had quite a few clunker eps the last season. As discussed before, Roddenberry wanted to corner the market in TV SciFi and CBS wanted to strip ST of its huge budget. The dilution of backstage talent sent to develop other shows and the loss of money created a few Lost In Space style monster of the week episodes. BTW, Lucille Ball actually saved the show at the start.

Speaking of Lost In Space, the Netflix reboot season 1 was pretty good. I recommend it. We onlt got through 3 or 4 eps of Season 2. Before Seattle became Caracas del Norte I visited the Experience Music Project, and as I Wiki it this morning is now known as the Museum of Pop Culture. At the time they had recently acquired a cargo hold full of SciFi memorabiia and the basement of the EMP building was remodeled as a SciFi museum. There sat the shooting model of the Jupiter 2. It was nearly five feet in diameter and very impressive. Among the many other things I saw that day. Klaatu Barada Nicto!

I still watch NCIS, one of only two shows I DVR that originate from the broadcast networks. I love how the hinterlands near DC look just like California right before PG&E cuts off power due to fires.

The tobacco barns in Western Kentucky are still in use. It seems that foreign grown tobacco is suitable for burning but not for chewing. When I lived in my lakefront house in KY often the oak smoke from the curing of hanging tobacco would flavor the air for miles around in the fall. With an influx of newcomers, those tobacco curing barns situated along main highways would put out signs exhorting travelers to not call the fire department.

We are doing a three-night camping trip next week and we plan to stay away from campgrounds on the weekends. We will be at Pickwick Landing State Park in southwestern Tennessee, very near the site of the Shiloh National Military Park. My wife declined my invitation to take the driving tour, but I will certainly do it on my own at some time if I have to.

Instead we will be going to the Florence/Muscle Shoals Alabama area, just 50 miles from the Park, and tour the Muscle Shoals Sound Studio, a place Lynyrd Skynyrd sang about. we will also tour the Frank Lloyd Wright designed Rosenbaum House in Florence, AL. Should be a nice day trip from the campground.

And after picking up my local printed mouthpiece of the Democratic Party this morning I serendipitously find that Captain Kirk turned 90 years old today.

Speaking of Star Trek captains, my Dad quipped that in the future they couldn't even cure baldness after viewing his first episode of Star Trek: The Next Generation.

ST:TOS had quite a few clunker eps the last season. As discussed before, Roddenberry wanted to corner the market in TV SciFi and CBS wanted to strip ST of its huge budget.

That last season is known in Trek canon as The Black Hole. And the net wasn't Black Rock, but the Peacock. Desilu was bought by Paramount late in the second season and Paramount had no idea what to do with Trek, so basically, they just let it die.

The only good episodes that year were the Tholians, Lee Meriwether, and honorable mention for Janice Lester.

Speaking of Star Trek captains, my Dad quipped that in the future they couldn't even cure baldness after viewing his first episode of Star Trek: The Next Generation.

Originally, Jay Leno's line. TNG was all Roddenberry and it showed how much Gene L Coon did for the first show.

Roddenberry was notorious for grabbing credit and hitting on cast members. I don't doubt for a second it's why Denise Crosby and McFadden left.

They grow chewing tobacco in Wisconsin. They grow shade wrapper tobacco in CT. Worked the fields as a kid. Tough, hard, work.

Happy birthday, Captain Kirk. I liked his acting in TOS, and for all the mockery he gets, and let's face it, some of it is deserved, he actually had a pretty good range in that series. The last episode of season 3 he is taken over by Dr. Janice Lester and he pitches a hissy fit like a pro.

Sure, the Spock's Brain episode is best ignored - what the ever livin' eff was that all about, and while the plot of The Empath was nonexistent, I liked the mime work in that one.

But back to the important subject, Muscle Shoals. I was there long ago, I flew to the MS airport so I could visit the NASA site nearby. I can't remember whether they were a customer or whether we were trying to sell them our software, who cares about such trivialities, I was in Muscle Shoals! What a place.

Before you go I recommend that you watch "Muscle Shoals" featuring Rick Hall and the Swampers. I have watched it twice and it is a remarkable story. Well worth the time. Highest recommendation! Just the thought of Rick Hall and Aretha's then-husband trying to throw each other off a 3rd floor balcony is impressive enough, but wait, there's more!

I'm tellin' ya, you need to sign up so you can post your travelogues on this here site. We shut-ins love to hear stories about the far reaches of the world.

LOL, a travelogue to Muscle Shoals would only entertain us deplorables.

I prefer hijacking your threads, Sixty. That way there's no pressure to make actual blog posts.

And as edutcher above shows, my 62-year old memory isn't perfect and getting just the facts, ma'am, correct for everything in a post can be a chore.

Oh look, "Muscle Shoals" is on You Tube:

Hijack at will. I am okay with that. And wherever you see it, just be sure to see it. It is a good story.

And as edutcher above shows, my 62-year old memory isn't perfect and getting just the facts, ma'am, correct for

It helps I have 10 years on you. What you saw in reruns, I saw first run and, yeah, that last season was really that bad.

Oh, I am old enough to have watched first run TOS episodes, edutcher. I may have fallen asleep a time or ten considering I grew up in the the Eastern time zone, however.

Thanks for the thread jacking endorsement, Sixty. I do try to make at least part of my comments on topic. And if you do a post on "gear" I have a long list of items "required" to outfit a tow and camper that would be on topic-ish. And really boring for the uninterested.

It just amazes me how much stuff we "need" to travel comfortably. But if I wanted to rough it I wouldn't have given away my REI 4-man tent.