As it must come to every life, the end came to a great cat of mine today. 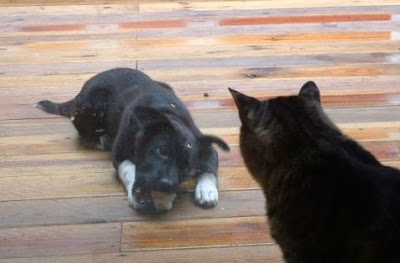 Here he is in 2008 staring at the new puppy. He was 8 years old when that picture was taken.
But I really should start at the beginning. In 2000 I changed jobs and came off the road. I didn't want to be that old guy schlepping through airports, never staying put, just chasing customers and money and not putting down roots, dragging my suitcase down yet another concourse in some strange city, running, hoping not to miss my flight, and so on.
So I took a job that allowed me to stay home. By some chance, my then-girlfriend had just started working at a place and she found some feral cats, including a tiny kitten who was in rough shape. She took him home, nursed him back to health, and after a couple of weeks I asked if the little fellow could come live at my house. He could. 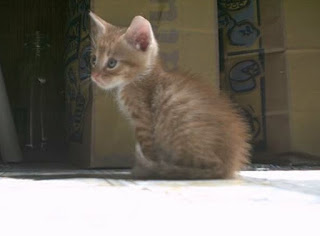 He was a wee little bitty thing, but he made it. He was the first cat I got as an adult. Knowing nothing of cats and how their cat brains worked I thought "He should have a little cat buddy". I have since learned that cats are not pack animals, but that's how we learn, eh?
By then my GF was working at a vet's office and they had a resident cat that needed to be rehomed. I asked what he was like and she said "He purrs a lot." Well, that's all I needed to hear. So in early August 2000 I got my second cat. I almost named him Truckee because he purred like a truck, but decided he needed an Italian name to go with the first cat which I had named "Benianimo", a misspelling of the first name of a favorite sculptor of mine. So I named the new cat "Topolino" which means little mouse, and I have taken some grief over the years for that, but what the hey. I thought of it as ironic, as he was neither little nor a mouse. 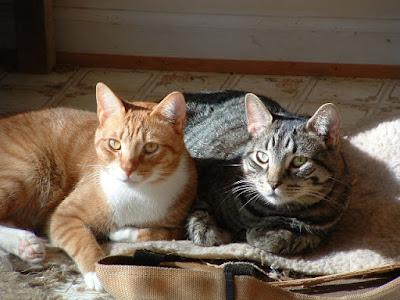 Here they are, a bit later, maybe 2001 or so.
Years passed, other cats came and went, dogs showed up, then they too moved on. Through it all Topolino was steadfast. Purring, sticking to his Pappy like glue.
He didn't have a lot of adventures, he was an indoor cat after an unfortunate Christmas eve in 2000, but he was content. I took him to the vet, kept him well fed, safe from all the other animals that occupied our house, and as with the best of cats, as he got older he would sleep on top of me and steal my heat. I was good with that. Anything to lighten his metabolic burden.
Speaking of lighten, in 2005 I had to get my mitral valve repaired and one of the discharge instructions I got from my heart surgeon was "Do not lift anything that weighs over 15 pounds." I had to tell Topo that for a while, anyway, he was out of luck - since he weighed 16 pounds at the time I couldn't pick him up. We adjusted, I got better, and over the years he lost weight.
Have I mentioned his purring? People always mention his purring when they talk about their interactions with him. He would purr if you looked at him. The vet complained that she couldn't hear his heart because he purred so loudly. He was a purring little fellow. I found that very comforting to me, and clearly it worked for Topo as he lived to be 21, and it is my unscientific opinion that all that purring had a curative power. 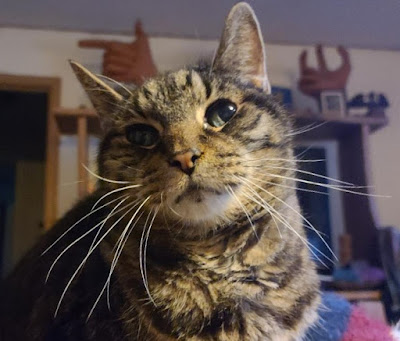 I took this picture last week - he was sitting on me and the light showed off his whiskers nicely.
Yeah, I am going to miss that little fellow a lot. Twenty one years is a long time. My marriage only lasted a bit longer than that and unlike my wife, Topo never complained, didn't take half my net worth nor drag me through a months long court process that ate up what little money I had left. He was grateful for everything we shared and never failed to purr to let me know.
Recently his health failed, his strength escaped him, and this morning I knew it was time. I never want to deprive an animal of a single day of good health or sunshine or food or companionship, but there comes a time you know that it is serving no one to prolong a life of pain or infirmity. Today was that day.
I know that for months I will see him out of the corner of my eye, call the other cat by his name, and only slowly will I adjust to the fact that he is gone.
Thanks for everything, Topolino, twenty one years was a great run for a cat and I hope I was as good a Pappy as you were a cat.
Posted by Sixty Grit at 9:20 PM

Sorry for your loss, SG. Critters can sure work their way into our hearts.

Cats seem to enjoy their lives better than we humans.

Thanks to you both - I appreciate your words.

So sorry to hear this news but what a great cat life he had alongside you. 21 years!
I've lost two so far and it's rough going for a while with that little spirit gone.
Stay strong and realize you made his life so great for so many years.

Sorry to hear about your cat.

It's always tough when you lose a pet.

Thanks, Troop, it is, especially one who lasts as long as Topo did. He was a good ol' boy.

I appreciate where you are coming from, Amartel, I have lost many pets along the way, and it is never easy. Hell, I still miss Huckleberry the dog my parents got rid of in 1955. I guess the wound scabs over but the injury never heals.

Sorry about Topo, Sixty. Sounds like he was a good cat.

We have to travel with one that needs meds every day but isn't a cuddler. The lap cat stays home and sleeps on the cat sitter.

The little orange cat in the pictures required daily meds. A good friend taught me how to pill a cat.

I was thinking about buying a trailer, and at that time I had three pets. Now, even down to only two, I don't think it's a good idea, at least for me. My dog Boudreaux does not like to ride in the car - and honestly, I don't think I am that poor a driver!

LOL @ Boudreaux. I was at a customer's place last week and the neighbor's dog wanted to jump into my car for a ride. I'd never even met the dog (or the neighbor) before.

I had a rumpy I had to pill every day. He didn't like it but got used to it. I'd sit on the floor and back him up into my body, pull his head up, squeeze his cheeks 'til his mouth opened, pop it in, hold down his jaws and rub his throat until I heard the gulp.

It takes the two of us to medicate the current cat. Wife wraps him in a towel to keep the talons at bay and then I pill him.