I had just started my new job. I took a week off and went to the beach. My girlfriend was working at the recycling place which was located on the site of an old brick factory. She asked me to stop by and pick up some bricks for landscaping or something. I filled my truck up with firebricks because she liked the color. I hauled them home, and over the years I have built a number of things with them - small fire pits, tall fire pits, dry stacked brick ovens, you name it. I even moved them with me when I moved 10 years ago, and guess what, today I sold them. All gone, buh bye. 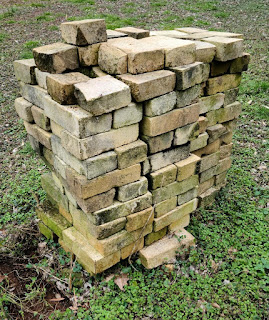 That's what they looked like the other day. Guy showed up in a Subaru to haul them off, we loaded that sumbitch up to the gills with bricks and by the time he left he was singing this song:
I told him that style was all the rage in San Jose.
Also in that same July my girlfriend brought me a kitten: 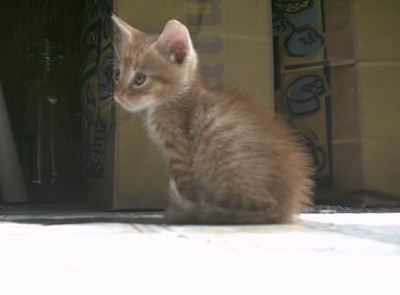 That's the little fellow when he first showed up - he was in rough shape, feral, but he and I bonded and he lived at my house up until he was 16. He was a great cat.
And, knowing nothing about cats I figured he needed a sidekick, so I got another cat in August of 2000. 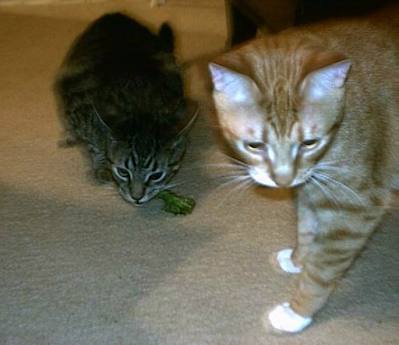 This is a picture of the two of them fighting nearly to the death over a piece of broccoli. Go figure.

The mackerel tabby is still here, he is approaching 21 years of age, and we stick together through thick and thin. 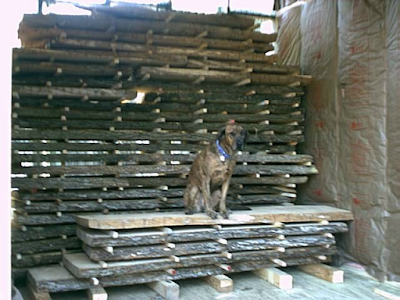 The GF also left her dog with me, and all things considered, I got the best part of that deal. In this picture the dog is guarding a pile of slabs I sawed with my Stihl powered Alaska saw mill. I made many boards back in the day, still trying to get rid of them even now. That is a solar powered drying shed I built at my last house. Last time I checked it was being used as a chicken coop. Since it was built to hold tons of freshly sawed slabs I think it will hold chickens just fine. Buzzards, condors, rocs, you name it, that shed will handle 'em all.

Which brings us to this evening - it is pouring rain, again, no snow, which is good, flash floods, which are bad, and I managed to run two furlongs in the rain, which is kind of meh but better than zero.

One more thing - I watched "The Bad New Bears" this afternoon. I had never seen it before and now I think it is one of the top baseball movies ever made. It's kind of funny, Matthau is very good in his role as an over-the-hill ball player, drunken chain smoker. His mannerisms always remind me of my old man and his use of humor as a defense is something my pop would do too. One thing I noticed about the movie was that Bizet's Carmen was used as background music throughout the whole movie and that's interesting and pretty effective. Whoever scored the film chose the right selections for the action in the movie. The closed captioning that read "Singing in Italian" cracked me up, as the opera was written in French. It's a fine point, but there you go. Also, I have not been back to the beach since 2000.

Are girlfriends things that show up before or after separations/divorces?

Asking for a friend.

The Spanish word for girlfriend is novia which has obvious temporal connotations. On the other hand, the Greeks call a girlfriend a φιλη; the "η" is a feminine ending and the masculine version is a φίλος.
Ah, we have such and so many problems with gendering in English; just wait until the word-nazis start those languages.

To answer your first question, well, if they show up before then they lead to the divorce. After the divorce one might be inclined to make up for lost time, so to speak, but that is not always a good path to follow. And in the time of make-believe plague, they might not show up at all. All the women around here are paranoid in the extreme. One woman I know even got vaccinated. Really? Go ahead, do it, but don't admit that publicly! And while wearing a mask might improve some women's chances of getting a date, I find masks off-putting.

As for gendered languages - I guess there are worse linguistic concepts, but it would be tough for me to think of one right now.

I was doing roofing with a crew of mexicans and they said "Dame la pistola". I had studied Spanish for three years but it had never dawned on me that a pneumatic nail gun might be a "la". Come on! A pistol is clearly masculine, at least in my world, what the hell are you thinking? That put me off Romance languages for good.

So, with ASL classes gone for the duration my continuing education in languages other than English is over. Kaput. Gonzoid. Fini!

Indeed he was. He also married a wealthy woman and was known to light $100 bills on fire just for fun. I guess with his background having money to burn was a luxury. Makes my Scottish skin crawl, however, as does gambling.