I have been running some boards through my planer lately, but the last few times I did so it kept blowing the breaker. The blades were dull. Today I wanted to plane some more boards, and since it was getting cloudy as a storm approached I figured I would replace the blades, then, if I had a chance, run the planer after the storm passed.
A storm was definitely brewing: 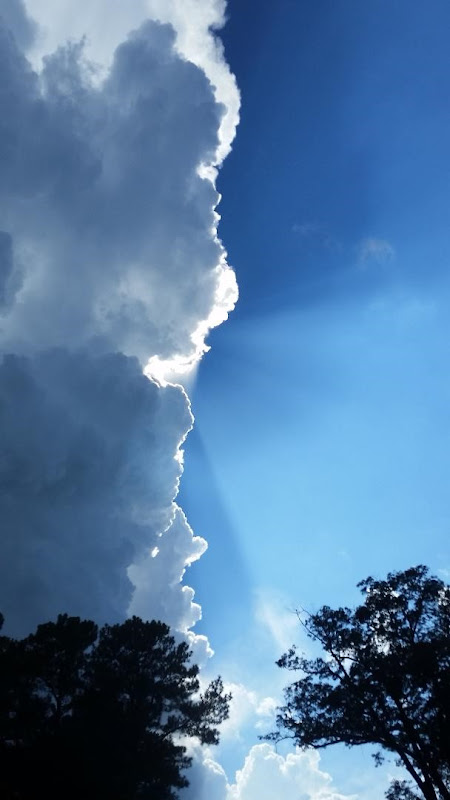 You can see some interesting things if you stand directly under a thunderhead.
There was a cloud building up down east of here: 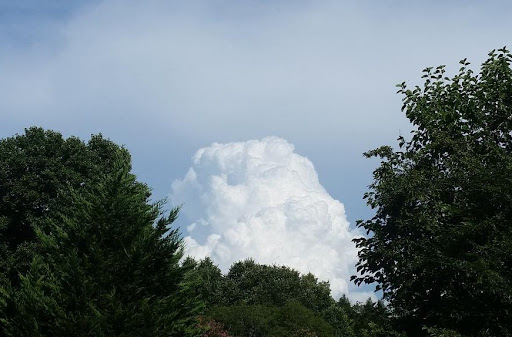 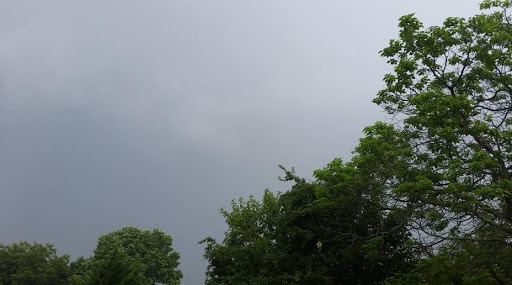 While it was pouring I was in the shed replacing the planer blades. The lid of the planer and the blades themselves are all held in place with hexalobular internal screws, also known as Torx or star drive screws. On some woodworking projects I use deck screws made by Deckmate to hold things together, and when you buy a box of those they throw in a T25 size Torx driver. So over the years I have collected quite a few T25 drives, and so when I started working on the planer I grabbed a T25 bit that was lying around and commenced taking things apart. That size bit worked well enough to remove the cover, but when I started to try to pull the screws that hold the blades in place it didn't work at all well. Those screws are torqued down pretty well to prevent the blades from flying out of the machine as it runs, as that would be, well, suboptimal. The curious thing about Torx head screws is that a bit might fit, and even seem to be the right size, but when you twist the wrench the son of a gun starts stripping out the screw head.
Then I noticed a note I had written with a Sharpie on the inside of the case some time ago "Use T30". What a thoughtful and helpful hint from me in the past. Grabbed the T30 bit, and what do you know, that was the correct size. I continued to work, thunder and lightning were all around, the work went smoothly, and once I sprayed myself with Deep Woods Off even the mosquitos stopped being a problem. I got the fresh blades installed, and as I buttoned up the machine the storm move out of my neighborhood. Excellent timing.
I ran the planer for a while, planed many boards, went inside, fed the animals, and next thing you know we had a nice sunset. 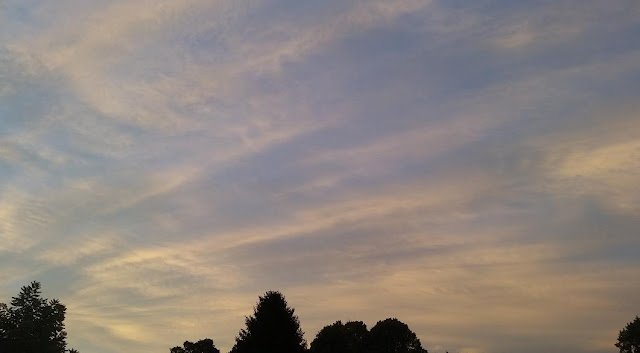 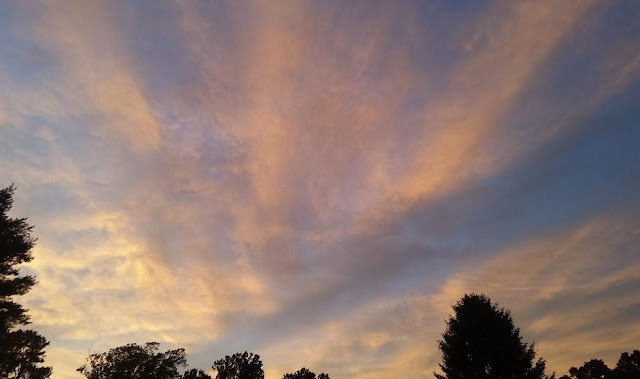 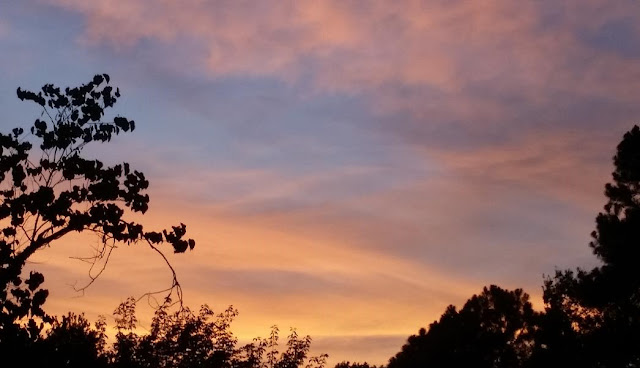 So there you have it. Not all estrella cabeza screws are created equal, every storm passes, eventually, and we keep on keepin' on.
Need some gut bucket down and dirty blues this evenin'. Thanks, SRV.
Posted by Sixty Grit at 10:37 PM

Some guys probably keep an encyclopedic inventory in their head of various bolt and bit sizes and whatnot but I'm not one. The ordeal of fixing my car or truck is quickly forgotten as soon as it's done so I enter it all in notebooks. Same with my mower and snow blower. Your note on the Torx bits is a good example. - I'll have to admit I didn't know those little buggers could be stripped out.

Clouds yesterday but no rain here and we could use it.

We are under a flash flooding alert this afternoon, and the hurricane is days away. I wish I could share some of this bountiful rain, but alas, it is not up to me.

Years ago I bought an array of Torx bits so I could rebuild my chainsaws. It's nice to have a good selection of obscure tools lying around in one's toolbox. In fact, I just noticed that I am still carrying around a drum brake tool that I have had since the '70s - you can use it to stretch the return springs onto the back of the brake shoe. That's one I have not used this century. It is quickly becoming a relic.

Planar, jointer, router, lathe, table saw -- I learned to use all those power tools in Machine Wood in high school. I recently reacquired a pedestal table that I made back in HS for my mom. Solid walnut except for some faux marble laminate on the top. One of the last things my mother told me is that she would have sprung for real marble had she known what I was making back then.

Having owned homes for many years, I've amassed a collection of various tools. But my circular saw has a broken arbor and it's stuck with a masonry blade on it. I'd like to keep this as is because it turns out I'm more often cutting up bricks and tiles for various outdoors projects. So I've ben thinking about a new one. Any recommends or better -- ones to avoid.

I wore out a Craftsman circular saw that I bought nearly 50 years ago - turns out that is possible. I got many years of use out of it, built many houses, so it was a good value for the dollar. Then I bought a Dewalt at a pawn shop 20 years ago or so, that one is still going strong.

I also bought a Festool circular saw which has a track so that you can make very straight cuts, it connects to the Festool dust extractor, AKA, shop vac, and it is okay, especially when I need to saw material thicker than the maximum depth of cut on the Dewalt. The problem I have with the Festool is that sawing at maximum depth through tough material such as white oak the blade tends to come loose from the arbor. Other than that annoyance it is a good, if expensive, tool.

The rule of thumb (other than keep your thumbs clear of the blade) is buy the best tool you can afford. That has generally worked for me.

One more thing, now that I think about it, ergonomics play a big role in power tools. The Dewalt is heavy - actually quite a bit heavier than the old Craftsman, and after a day on site I would notice that hefting that thing was more tiring than the old, lighter saw. Also, get one that fits your hand. Maybe even check to see if you can sight precisely where the blade is cutting - that is easy on the Dewalt, nearly impossible on the Festool. I have to use a notch on the front of the foot of the Festool as my best estimate of where the blade is actually cutting. I prefer direct observation.

As for the drum brake tool mine has gotten more recent use than I would like. If I get another vehicle it's going to have rear disc brakes.

nd: Guess that would make me Al, the assistant. That's not too far off. Whereas Sixty is constantly revving up his high powered saws, planer and lathes in true Tim the Tool Man macho style you'll find me hacking away with a hand saw because I'm squeamish about using my circular saw any more than I have to even though I've had one for years.

Dad, If you have some plaid shirts, you're Al.

The sky pictures are wonderful. That this thread would take a tool turn is fine and dandy, but the unusual beauty present in your photos is also worth noting and much appreciated. I'd left the first one up on the screen last night, and when I saw it there later from across the room, I did a double-take, as it looked like abstract art from afar and I wasn't sure for a minute what I was seeing. Strikingly lovely it was! Thanks for seeing and posting these Sixty--I see them as the sky version of the beauty you find and reveal in the bowls you turn.