"So your boy's name is what?

Life is funny that way, sometimes. Those are the opening lines of dialogue from "The Wire", which I watched again recently. Interesting show, it depicts the decay and degradation of a city that I used to visit, from about 1955 until the last time I rolled through on a train headed north in 2010. It is truly a shithole, but it wasn't always.


I did like several actual Baltimorons they hired to act in that series - Jay Landsman played Lt. Dennis Mello. When he speaks it is clear that he is from Baltimore. Another was actress Tootsie Duvall who played school admin Marcia Donnelly and she has a strong Bawmer accent. Hearing those two speak is like a trip home for me. Makes me smile.

By the time the writers get around to season 5 they are just lashing out at republicans and totally missing the fact that the ruination of that city was caused 100% by democrat policies and corrupt democrat politicians. The irony is lost on them, even as they portray it on the screen.

Good news is that all of the characters went on to great careers - drug slingin' thug kingpin Marlo Stansbury became Bosch's sidekick J. Edgar, the Bawmer pleece cheef became the L.A. Chief of Police, and so on. They moved on up, to the east side, that de-luxe apartment in the sky...

But back to reality - after several days of steady rain we now have water in our river again, and while I have not been able to get my dog out for long walks I figured out a new plan - since she is motivated by treats so I will put some dog biscuits in my pocket, run out to the far end of my yard, call her, give her a treat, then run back to the house. She follows me, I run back out, call her again, she runs back out, gets another treat, and this way we both get exercise and remain in a state of emotional equilibrium during weather that is a bit gloomy.

But I have been getting some work done. 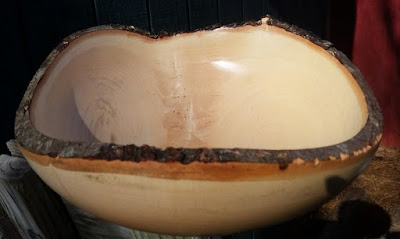 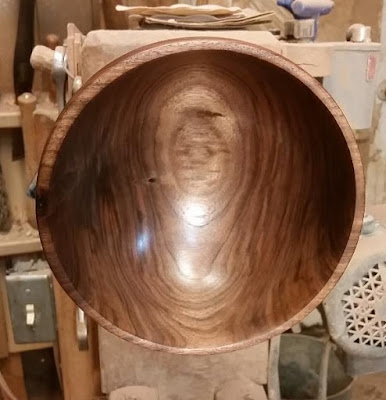 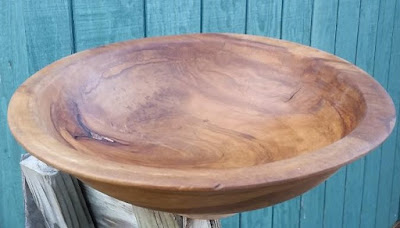 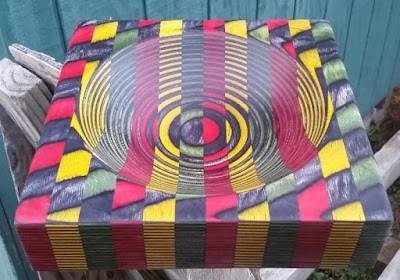 Bowls of various sizes and materials, also, the last sunset we saw prior to the weather setting in: 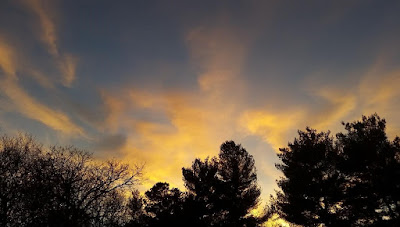 Being in a guitar mood I will post this one again - ah, sunshine and salt flats:

The rubber strings crack me up. The drone camera work is good, too.

I was searching for Tedesco and found Tedeschi.

She does not hold back - she leaves it all right out there on stage. Good job Miss Susan.

The rain stopped and I took my dog for a walk. Neighbors put out some "Holiday" decorations, and I use sneer quotes because polar bears sure don't have anything to do with Christmas as near as I can tell, and my dog really reacted to the little critters: 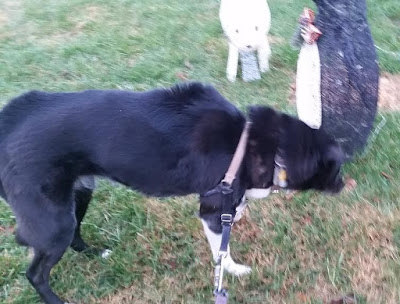 Sorry about the poor quality photo but you can see her fur standing up - good dog! Bite that polar bear! Bite its face off!

I got her to sit, but she did not trust that thing: 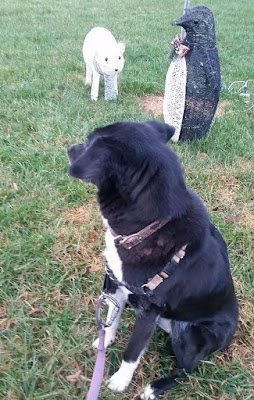 We also got a break in the clouds as the sun was setting: 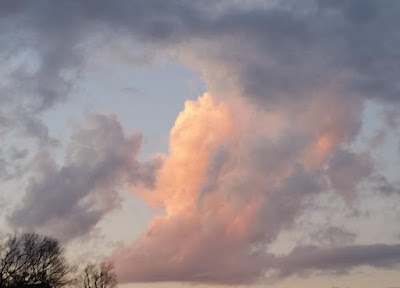 All in all a lovely evening.

Some good Washington-area actors were in The Wire, as well. Paul Morella (son of a former Montgomery County Congresswoman) is very, very good; he shows up in a number of movies and shows shot in the DMV, but apparently never made the move to Hollywood. Michael Kostroff is another: he played the definitive Sleazy Lawyer on The Wire.

The episode that Paul Morella was in was one of the few bright spots in season 5 - as an FBI profiler he describes McNulty to a t. That was a great scene as the agent lists all of the fictional serial killer's personality traits and McNulty's face sags as each point hits home. Good stuff.

Michael Kostroff is so good you don't think he is acting - I mean he is that sleazy lawyer, right?

Paul Morella did the best A Christmas Carol I've ever seen, at a local theater.

Nice post, SG. Funny the dog getting his fur up, he's a survivor, or will be should the need arise. I missed the 'Wire' first time a round, we'll have to give that a look. We liked 'Homicide - Life on the streets' sorta of in a street similar situation to 'Wire' perhaps. Lots of great acting mostly by characters of which I'd never heard. Maybe I'll re-watch it. Did your 16 y.o. self see making beautiful bowls in its future... lol.

I never saw H,LitS, but it was also written by David Simon, The Wire guy. I think there are probably a lot of similarities between the two shows.

My dog does react to new things - but the reaction to the decorations was a bit of a surprise to me, and, I guess, to her as well. She is a sweetheart and an all-around good dog. Biscuits for the good dog!

When I was just a youth, maybe 12 or so, I asked my father if I could use the lathe that his father had given him - it was just sitting in the basement, I wanted to make stuff, and he said that I couldn't. Too dangerous or something, or maybe he just didn't want me to know something that he didn't.

Anyway, as time progressed I learned how to throw bowls on a potters wheel, which is related to a lathe, then when I could take some adult ed classes I turned a few bowls, not good ones, mainly because proper bowl turning gouges were not widely available in those days, and even in college I tried to turn bowls, but the results were unsatisfactory. Then, 14 years ago I took a class with a guy over in a county east of here and finally learned how to sharpen a bowl gouge, how to use a bowl gouge, and how to sand bowls. Since then I have made several thousand of them.

But to answer your question - it's not clear that I did see myself making bowls, yet I always pursued it. While I am mostly interested in moving forward and learning new things, sometimes I do reflect on how I got to where I am. Who knows - it's kind of on purpose and kind of by chance. In ASL I would sign that as "happen luck" and that about sums it up for me.

I did my first back yard run about three weeks ago. Then it got cold and then it snowed so I'm thinking March or April might be a good time for my second run.

Thanks for the answer, SG. 'happen luck' a good a reason as any.

Good job, Dad Bones, one day at a time. So far it has been cold but we haven't had any snow yet. I have been wondering how I will deal with snow on my track, and right now I am leaning towards "A good day not to run" as being my first response. I will figure that out when it happens.

As of right now it is clear and I just reached day 66 and counting.

And you are welcome, XRay, I appreciate the opportunity to reflect on my path so far.

This weather makes me choose the Mall of America or my treadmill for my daily walk. Neither are good a good choice. Heading to Cozumel for 10 days on Thursday. Walk and swim combo are my favorites.