Here is the song I usually post on this day - it seems appropriate:

I have very fond Christmas memories of my father conducting the church choir in much of Handel's Messiah. This one stuck with me. 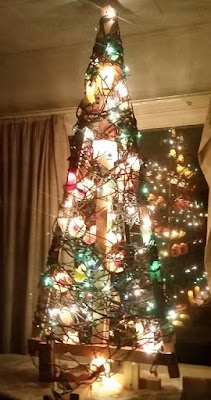 I got the tree set up in the front room - a day late but it is out there blinking away.

Read more at your own peril - it is, predictably, just more of the same.

Yesterday was unseasonably warm so I got a lot done. The day started with a nice moonrise: 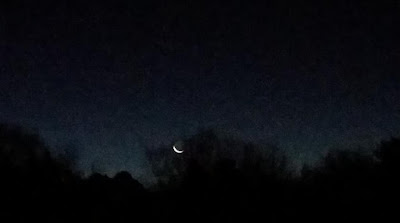 That was followed by a nice sunrise: 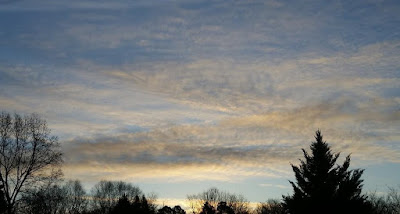 I then turned a nice catalpa bowl: 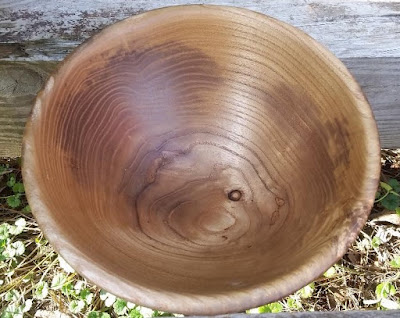 As Rabel pointed out, it has a knot in it. But what it also has is astounding chatoyance, which is difficult to photograph, but in motion that bowl reflects light in the most amazing way: 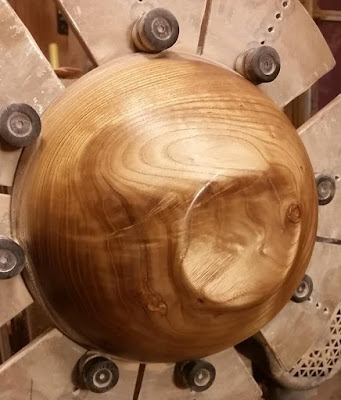 During the course of the day I ran a mile and also walked two miles including a jaunt up a hill in the woods: 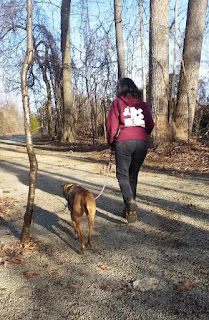 That's my friend Mary and her dog Meggie - we manage to walk a lot of miles together and for that I am thankful.

I also watched "Irma La Douce", with Jack Lemmon and Shirley MacLaine. The director, Billy Wilder knew how to squeeze the best performance out of Jack Lemmon, that's for sure. As with other Wilder movies it almost seems as if all the scenes, gags, jokes and assorted stage business are just a set up for the final joke at the end. I hadn't seen the movie in a while so I had forgotten what that gag was, and it was amusing to see it again. Lou Jacobi steals every scene he is in, but with a character named Moustache how could he not? Also, Kiki the Cossack is played by none other than Yeoman Rand, how about that?

I have spent so much time typing this post that now the sun has risen on a wonderful Christmas day: 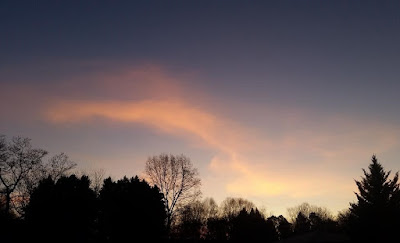 So there you have it - another slice of life, a day like many others, boring, same-same, and for that I am grateful. I will drive over to my old neighborhood this afternoon for conviviality, food, laughs and good times. I should be home before the sun sets on me in that town.
Posted by Sixty Grit at 7:40 AM

I lov3e that tree. Not sure what I'm looking at. HOmemade? out of lumber?
I like it.
The music is so perfect.

Not a single present this year. We asked the kids if they wanted anything and they said "No," so that was that. We did get a tree. My daughter returned home from WWOOFing for the past six months, just in time for the two of us to go get a tree. Probably the last time that will happen. Son was able to come home for a few days, but had to return this afternoon to Raleigh to get back to work.

Love that selection from Handel, Sixty. Thanks.

Thanks, all, and Merry Christmas to each and every one.

BB&H - I made that "tree" out of dimensional lumber which I resawed then screwed together into the approximation of a tree shape. The stings of lights are permanently attached and once Christmas is over (I used to be more traditional and leave it up until January 6th) I bag it up and put it in the attic. Easy peasy, other than maneuvering it up and down the folding steps to the attic. Plus, from the street it looks like a nicely decorated tree.

I hope you and your family had a great day, Spins, wherever you are. I trust you have returned to this country.

The idea of no presents is a sound one - I give my children money but specifically request that they get me nothing - seriously, I am good. Plus, anything they give me is just more for them to deal with when the clear out my house. Ha!

Handel is one of my favorite composers these days. He produced a lot of music in a great variety of styles. Good stuff.

WWOOFing, eh? My ex- was doing that in Burnsville. Good stuff.

I spent the day over in my old neighborhood talking to friends who are still there and met the new folks who have moved in. Got caught up on how everyone's pets are doing, that's always important, and told many a tall tale about one thing and another. Also found out that I sold my house at the absolute bottom of the market and it's now worth twice what I sold it for 8 years ago. So it goes...

Lesson - do not ask me for investment advice.

Okay, just looked up WWOOF. So what does it amount to, free labor for organic farmers? Don't jump down my throat if I'm wrong, 'kay?

You got it. You work on an organic farm in exchange for room and board. It allows the WWOOFers the opportunity to travel the world very inexpensively. Basically, your only expense is the travel to the farm. The work requirement is pretty light, maybe 30 hours per week. Not like the family farm, where you work 24/7/365. In your off time, you can explore the area. Pretty good deal, actually.

We were astounded how many people knew about it, had done it, or knew someone who had done it, when we started talking about it. Something we had never heard of just a couple of months before my daughter decided to to it. Come to find out, WWOOFers have come to our town to work. My wife was talking to someone at a business meeting, whose daughters had both done it.

The free laborer part muddies the waters. Some countries realize that that's exactly what it amounts to, and they won't allow WWOOFers in. They have to be careful to say that they're just sightseeing or they may be (and have been) turned away at the border. Oops, now what?

My daughter graduated college last spring with a degree in Dietetics and Nutrition and wanted some time off between her internship/grad school and her undergraduate degree. She desperately needed some down time. WWOOFing also looks good on her experience, so it was a win-win situation for her. Pad her educational resume and see the world real cheap.

Watch for the neck-hair-raising soprano at 1:38

Thanks for posting that, rh - that is beautiful. As I have gotten older I have found I enjoy original instruments more and more - maybe it is that the sonority matches my hearing better, but in any case, Hogwood did a great job on that one.

As a side note, he was known as "Christopher Hogwild" by others in his musical circles. I hope that was done out of respect as he changed recorded music forever, in a good way.

Ah, when one hears such music one can only think Mozart - the Miserere mei, Deus was not published, Mozart went and listened to it, wrote it down, then went back to make sure he got it right the first time - that's how that piece became more widely known. Now that is genius right there. As is that soprano - hoowee!