I spent the morning working on a design for a new display and around 11 AM I heard a funny sound outside. The windows were open and a cat which had been perched on the window sill took off running in a frenzy. I didn't pay any attention to it, but then when I went outside and looked down my driveway this is what I saw: 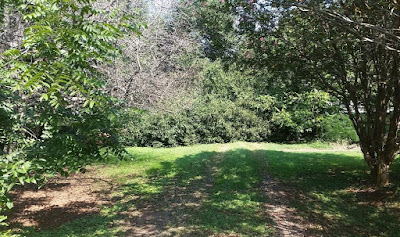 There was no way out - my driveway was completely blocked, so a jaunt to the store to acquire materials was right out. I walked around to the other side to assess the damage. This is what I saw: 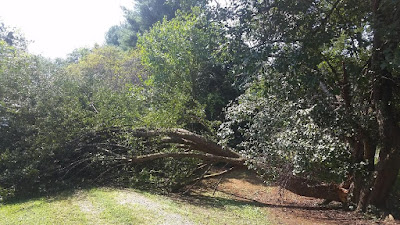 It's not terribly clear in that picture, but a large branch which was growing laterally out of the trunk had rotted over time and it chose today to fail. No wind, no rain, nothing. Dead calm. Clunk. 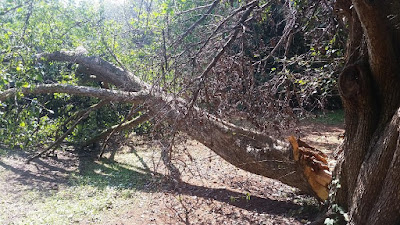 That picture is a bit of a closeup. The limb is over two feet in diameter and being Bradford pear, it is incredibly dense. Also, it is some of the worst brush to work with - it has short branches that tear up my skin. Oh well, what are you going to do? Well, what I am going to do is sharpen the chainsaw and get to work.

I started by carefully trimming the branches that had bent over a white oak tree which I had transplanted from my previous house: 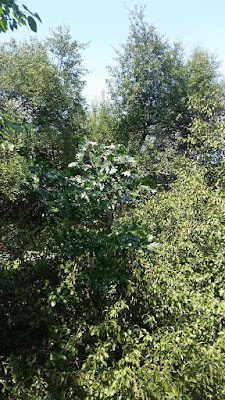 I wanted to make sure it was okay and also to clear out around it so that it wouldn't get nipped during all the sawing and dragging action. As of right now it is fine, which makes me happy.

To give you an idea of just how large this tree is, here is a picture of me leaning on it back in 2011 - it's had 8 years of growth since then: 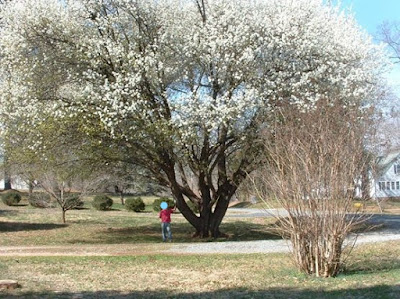 This tree sheds limbs all the time - last year I took this picture while working on an upper branch that snapped off and had to be sawed up and dragged - the bar on the saw is 3 feet long and the branch the failed today is the one on the left of that picture: 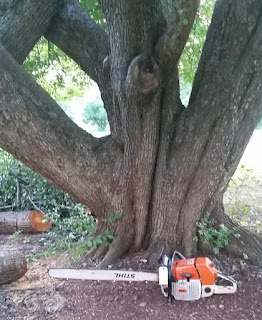 Eventually, after much sawing I was able to get the driveway passable: 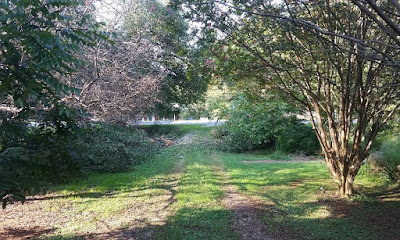 I still have a ton of wood to saw and haul, and much pointy brush to deal with, but at least I can drive down my driveway in a stately manner and buy things like more gasoline for my saw. 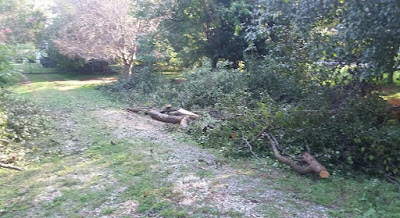 So I left it at that - working in 90+ degree heat with high humidity was draining. I have been drinking water trying to rehydrate. Now I will rest and know that the logs will still be there in the morning. Sadly.

The burn pile is already nearly 6 feet tall, and it will grow taller ere I set it alight.

So, as soon as the hard work presents itself, the cat runs away. Typical.

If you're going to have Bradford pear trees, you're going to eventually have to clean up the mess when they split off. We had one and it split and fell in two pieces. One covered the driveway and the other covered the road. I discovered it when I got home about 11:00 one rainy night. It's fun to cut up a tree in the rain in the middle of the night. My neighbor must have been watching for just the right time, because as I was finishing getting the road cleared, he appeared and offered to help. He must be related to that cat of yours, because he certainly was a pussy.

Glad you had good weather to whittle away. Too bad summer hasn't surrendered yet. It's 90s here in the mountains still.

I would have appreciated a bit of coolness, like right now - it is 73 degrees - ah, working weather. But no, it had to be hot and humid. Anyway, I made it through that part of the job and I can drag brush any old time - after all, what's time to a tree branch?

And as this tree continues to fail I am now considering paying a tree guy to take it down and grind it into chips, for which I would say "Thank you very mulch!" It is huge and while it is not close to anything other than the road and my driveway, as you say, it is better to have some control over when one works on such projects.

Well played with Van the man. My brother lives in Belfast where Van is from. Evidently he's such a complete jerkoff in person he is hated by his own townsfolk...

Can't really blame him - can you imagine being in the public eye for over 50 years? I would not be polite either.

Kind of like posting 9 shitposts every single time anyone else puts a post on this increasingly shit blog.

Don't you crackers have any Mexicans to do this work?

As a proud Southern man I do my own work. Hiring or importing others has a long history of failure around here.

Wow, that would have cost me a pretty penny to have had it cut up and hauled away.


Manly men take care of business, no matter how daunting the task.
They also serve who only stand and wait? Er...no, alack alask.


Could've written stand and watch (more apropos) but the famous theological phrase (which is totally beyond me comprehensionwise) is stand and wait.