I have been watching Roald Dahl's "Tales of the Unexpected" on Prime. Each episode is introduced by the writer himself and sometimes he says something interesting. In season 1 he mentioned that sometimes it takes him 600 hours to write a short story. I don't know what to make of that. I read a book of his short stories 50 years ago and I had no idea that he spent so much time on each one. Any way, with all this talk of story telling I decided that for extra credit in my final ASL class of this session that I would sign the story of how I became interested in learning ASL. So I have been working on the framework of the story which I will then translate into ASL. Since I will have to present it on Monday I won't spend 600 hours on it. I also won't get paid for it, either. So it goes.


In other news I got my young dog to sit for her 11th birthday portrait today. Treats were involved: 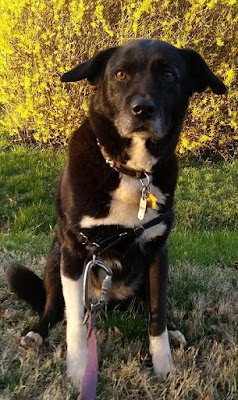 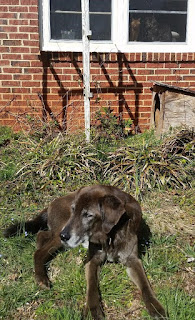 I found a live oak tree while walking the other day: 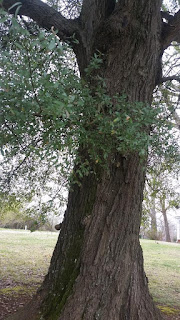 That's not a good picture of it but after walking past it for years it finally dawned on me that it is a live oak (Quercus virginiana) - I have long wanted to work with the wood from one of those but since that one is on private property I will have to find another. But at least now I know what I am looking for.

I also found leopard lilies (Lilium pardalinum) growing in the wild, but I can't get the picture to load. Imagine seeds that look like blackberries and you won't be far wrong.

That's it - must keep moving, things to do, places to be.

A tree with leaves and happy dogs. Looks good to me. "Time Is Tight" and I wouldn't say it's on my side either, but that makes it all the better.

It kind of concentrates one's mind, as the Samuel Johnson said with regards to a related subject.

Lol That was worth looking up. A date with the hangman's rope would do it.

As a storyteller, Dahl hits it out of the park. My favorite book of his is "Going Solo", which I read to the Msons when they were sprouts.

Want to know what honed his sensitivity? In 1920, when Dahl was three years old, his seven-year-old sister, Astri, died from appendicitis. Weeks later, his father died of pneumonia at the age of 57. At nine he was sent to his first boarding school,St Peter's, and entered the second one when he was 13. Dahl disliked the hazing and described an environment of ritual cruelty and status domination, with younger boys having to act as personal servants for older boys, frequently subject to terrible beatings.

While reading this, I also learned with regard to Going Solo: his biographer Donald Sturrock claimed that there are disparities to the author's claims in the book, describing them as flights of pure fancy or compelling recreations of stories heard from others such as the accounts about exotic African animal adventures. True or not, they are well told and fun.

Sending warm regards to the Older One who's earned his place in the sun, with wishes for more good days like that for him, the Birthday Dog and The One who keeps his eye on them, the cats and the trees.

Just looked up Roald Dahl on Wikipedia. He was born in 1916 which probably seems ancient to some but not to me since my Dad was born in 1907. I guess Ronald was too common for his parents.

Okay, I just figured out Roald as opposed to Ronald -- his Dad was Norwegian.

Pin oaks are beautiful trees - I had two of them at a former house and liked them a lot - great form and they turned nice colors in the fall, or so I am told.

Roald, like many Brits, after fighting the Krauts turned into a Nazi himself. I have no idea what happened to him - sure, he did suffer brain damage in a plane crash, but he really went around the bend in his old age.

Thanks for the kind thoughts, MamaM, we are all doing what we can here and today, in addition to a 3 mile walk with my young dog, I had a nice talk with my nice new woman dentist about filling materials - she knows what works on teeth, I was curious about that will fill holes in wooden bowls. She laughed when I suggested that she mix glow-in-the-dark material in with the resins, but I think that would work well on bowls. Perhaps not so well in teeth. I hope to find out. About bowls, that is. I am not Boyd Crowder.

Well, I went looking and wished I hadn't. Some pretty ugly stuff on Dahl came up. More horrible life experiences, along with horrible responses and views of other people on his part. Maybe it's all tree roots and whatever resin works to fill the holes and create something of substance, value, beauty or excellence out of the wreckage.